Species diversity, phylogeny, endemism and geography of the truffle genus Tuber in China based on morphological and molecular data

The genus Tuber (Tuberaceae, Pezizales) is an important fungal group of Ascomycota both economically and ecologically. However, the species diversity, phylogenetic relationships, and geographic distribution of Tuber species in China remains poorly understood, primarily because descriptions of many new species relied heavily on morphological features with molecular data either not sought or ignored. The misapplication of European and North American names further added to confusion regarding the taxonomy of Chinese Tuber species. In this study, we examined more than 1000 specimens from China, and performed a comprehensive phylogenetic analysis for Chinese Tuber species using ITS sequences and multilocus sequence data. To infer the phylogeny of Chinese Tuber spp., 11 molecular datasets were assembled, including a concatenated internal transcribed spacers of the nuc rDNA (ITS), nuc rDNA 28S subunit (LSU), translation elongation factor 1-alpha (tef1-α), and RNA polymerase II subunit (rpb2) dataset as well as 10 ITS datasets (totally including 1435 sequences from 828 collections with 597 newly generated sequences, and 168 sequences from the types of 63 species). Our phylogenetic tree based on a concatenated multilocus dataset revealed that all Chinese Tuber species nested in nine phylogenetic clades (phylogroups), including Aestivum, Excavatum, Latisporum, Macrosporum, Maculatum, Melanosporum, Puberulum, Rufum and Turmericum. Of these, five phylogroups (Macrosporum, Maculatum, Melanosporum, Puberulum and Rufum) are shared across the continents of Asia, Europe and North America; two phylogroups (Aestivum and Excavatum) are shared by Europe and Asia; and the phylogroups Turmericum and Latisporum are endemic only to Asia. Phylogenetic trees based on 10 ITS datasets confirmed the presence of at least 82 phylogenetic species in China. Of these, 53 are identified as known species, including three new records for China, and 25 species are identified as new to science. Of the new species, nine are described and illustrated in this paper, and the others remain unnamed due to the paucity or absence of ascomatal materials. Accordingly, the confirmed, excluded and doubtful Tuber species in China are discussed. Tuber species showed high endemism. Of the 82 phylogenetic species found in China, 68 species occur only in China, six species are also found in other regions in Asia, and only eight species (T. anniae, T. excelsum-reticulatum, T. formosanum, T. maculatum, T. wenchuanense, Tuber sp. CHN-3, Tuber sp. CHN-10 and Tuber sp. CHN-11) are shared with other continents. Most Tuber species have a small and limited distribution in China, but a few, such as T. formosanum and T. parvomurphium, are widely distributed across China. Some phylogenetically closely related species, such as T. liaotongense and T. subglobosum, as well as T. xuanhuaense and T. lijiangense, show a pattern of allopatric distribution. 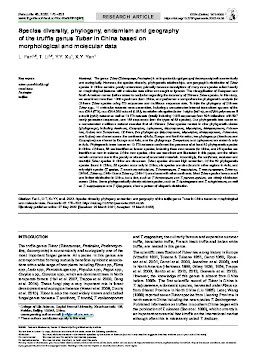