Phylogeny and character evolution in the Dacrymycetes, and systematics of Unilacrymaceae and Dacryonaemataceae fam. nov.

We present a multilocus phylogeny of the class Dacrymycetes, based on data from the 18S, ITS, 28S, RPB1, RPB2, TEF-1α, 12S, and ATP6 DNAregions, with c. 90 species including the types of most currently accepted genera. A variety of methodological approaches was used to infer phylogenetic relationships among the Dacrymycetes, from a supermatrix strategy using maximum likelihood and Bayesian inference on a concatenated dataset, to coalescence-based calculations, such as quartet-based summary methods of independent single-locus trees, and Bayesian integration of single-locus trees into a species tree under the multispecies coalescent. We evaluate for the first time the taxonomic usefulness of some cytological phenotypic characters, i.e., vacuolar contents (vacuolar bodies and lipid bodies), number of nuclei of recently discharged basidiospores, and pigments, with especial emphasis on carotenoids. These characters, along with several others traditionally used for the taxonomy of this group (basidium shape, presence and morphology of clamp connections, morphology of the terminal cells of cortical/ marginal hyphae, presence and degree of ramification of the hyphidia), are mapped on the resulting phylogenies and their evolution through the class Dacrymycetes discussed. Our analyses reveal five lineages that putatively represent five different families, four of which are accepted and named. Three out of these four lineages correspond to previously circumscribed and published families (Cerinomycetaceae, Dacrymycetaceae, and Unilacrymaceae), and one is proposed as the new family Dacryonaemataceae. Provisionally, only a single order, Dacrymycetales, is accepted within the class. Furthermore, the systematics of the two smallest families, Dacryonaemataceae and Unilacrymaceae, are investigated to the species level, using coalescence-based species delimitation on multilocus DNAdata, and a detailed morphological study including morphometric analyses of the basidiospores. Three species are accepted in Dacryonaema, the type, Da. rufum, the newly combined Da. macnabbii (basionym Dacrymyces macnabbii), and a new species named Da. macrosporum. Two species are accepted in Unilacryma, the new U. bispora, and the type, U. unispora, the latter treated in a broad sense pending improved sampling across the Holarctic 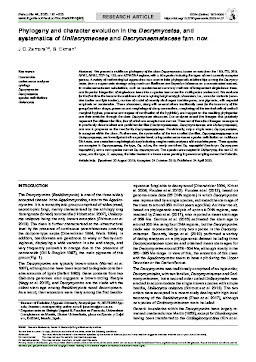