K. Hansen and I. Olariaga

The genus Otidea is one of the more conspicuous members of the Pyronemataceae, with high species diversity in hemiboreal and boreal forests. The genus is morphologically coherent and in previous higher-level multi-gene analyses it formed a highly supported monophyletic group. Species delimitation within Otidea is controversial and much confusion has prevailed in the naming of taxa. To provide a phylogenetic hypothesis of Otidea, elucidate species diversity and limits we compiled a four-gene dataset including the nuclear LSU rDNA and three nuclear protein-coding genes (RPB1, RPB2 and EF-1α) for 89 specimens (total 4 877 nucleotides). These were selected from a larger sample of material studied using morphology and 146 ITS (ITS1-5.8S-ITS2) and 168 LSU rDNA sequences to represent the full genetic diversity. Using genealogical concordance phylogenetic species recognition (GCPSR), Bayesian and maximum likelihood analyses of the individual datasets resolved 25 species of Otidea. An additional eight singletons are considered to be distinct species, because they were genetically divergent from their sisters. Sequences of multiple genes were included from 13 holotypes, one neotype and three epitypes. Otidea angusta, O. myosotis and O. papillata f. pallidefurfuracea are nested within O. nannfeldtii, O. leporina and O. tuomikoskii, respectively and are considered synonyms. Otidea cantharella var. minor is shown to be a distinct species. Five new species were discovered: O. oregonensis and O. pseudoleporina for North America; and O. borealis, O. brunneoparva and O. subformicarum for Europe. The analyses of the individual four gene datasets yielded phylogenies that were highly concordant topologically, except for the RPB1 that showed supported conflict for some nodes in Bayesian analysis. Excluding the RPB1 from the combined analyses produced an identical topology to the four-gene phylogeny, but with higher support for several basal nodes and lower support for several shallow nodes. We argue to use the three-gene dataset to retrieve the maximum support for the higher-level relationships in Otidea, but still utilise the signal from the RPB1 for the delimitation and relationships of closely related species. From the four gene regions utilised, EF-1α and RPB1 have the strongest species recognition power, and with higher ampliﬁcation success EF-1α may serve as the best secondary barcoding locus for Otidea (with ITS being a primary). The phylogeny from the three- and four-gene datasets is fully resolved and strongly supported in all branches but one. Two major clades, as part of six inclusive clades A–F, are identiﬁed – and ten subclades within these: A) O. platyspora and O. alutacea subclades, and B) O. papillata, O. leporina, O. tuomikoskii, O. cantharella, O. formicarum, O. unicisa, O. bufonia-onotica and O. concinna subclades. Morphological features in Otidea appear to be fast evolving and prone to shifts, and are poor indicators of higher-level relationships. Nevertheless, a conspicuous spore ornament is a synapomorphy for the O. unicisa subclade (/Otideopsis); all other species in Otidea have smooth or verruculose (in SEM) spores. Exclusively pale to bright yellow apothecia and straight to curved, broadly clavate to distinctly capitate paraphyses are synapomorphies for a restricted O. concinna subclade (/Flavoscypha). The curved to hooked apices of the paraphyses is suggested to be a symplesiomorphic trait for the genus. The reaction of resinous exudates on the outermost excipular cells that coalesce into amber drops in Melzer’s reagent is likely an ancestral state for clade B. We estimate that Otidea consists of 47 species worldwide, based on all available information (including morphology, ITS or LSU sequences, and literature descriptions). Three ﬁfths of the species occur in Europe, with 20 species recognised as endemic. At least 14 species occur in North America and 17 in Asia, with eight and ten species considered endemic to each continent, respectively. Our knowledge about Otidea in Asia is still fragmentary and the diversity likely much higher. 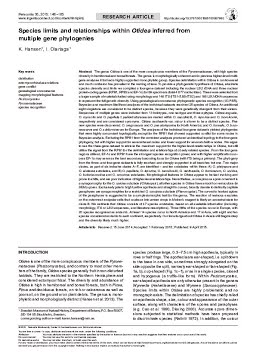