A review of the taxonomical and ecological studies on Netherlands’ Algae

The earliest account of the Netherlands’ Algae appeared in 1781 in D. de Gorter, Flora VII Prov. Belgii foederati indigen. Here, however, in the Algae lichens and liverworts have been incorporated. The true Algae, of which 35 are enumerated, are principally marine, though also aërophytical and freshwater Algae are among them. Some fifty years later F. A. W. Miquel gave a revision of the Netherlands’ Algae, with keys and descriptions in Latin and Dutch, in van Hall, Flora Belgii septentrionalis. We find them in two tribes: 1. Algae Chloricae, to which belong the bluegreens, the diatoms, the green Algae, the Charophytes; and 2. Algae Chromicae, to which belong the brown and the red Algae. At that time about too species from this country were known, which had been collected in Friesland, Groningen, Texel, Ameland, N. and S. Holland, Utrecht, Veluwe and along the coast of the Northsea (often drifted ashore). Of most of the Algae Dutch names are given. The first investigator, who occupied himself thoroughly with the indigenous Algae was R. B. van den Bosch, medicinae doctor. In 1853 he gave a general survey of all the indigenous Algae then known, freshwater as well as marine, in the Prodromus Florae Batavae. The list contains about 500 species. It stands to reason that the nomenclature is quite antiquated, the classification being based on Kützing’s Species Algarum. Instead of with Cyanophyceae, Chlorophyceae, etc., we have to count with Heterocarpeae and Isocarpeae. The first tribe including the marine red Algae, and the second all the others. The subordo Cryptospermeae for instance contains the families Mesogloeaceae, Batrachospermeae, Chaetophoreae, Lemanieae, a combination which strikes us now as illogical and chaotic. Van den Bosch had his identifications verified by Fr. T. Kützing, “the law-maker of algology”, as he called him, who was one of the most prominent algologists of that time. Many species of Kützing have been based on specimens from Holland, sent by van den Bosch. The materials for the enumeration had been brought together by the members of the “Nederlandsche Botanische Vereeniging”. Special mention deserve H. J. Molkenboer and C. A. J. A. Oudemans, who collected in the neighbourhood of Leyden, but most of all van den Bosch himself, who made an inventory of the Zeeland Algae. Fossil diatoms are added to the enumeration. Among these are a number of new species described by P. Harting. In 1854 W. F. R. Suringar, then 22 years old, gave a critical review of the algological knowledge of that time in general, and more specially of that of the Netherlands. The manuscript had been awarded the gold metal in the competition held by the Philosophical Faculty of the Leyden University. It is preserved now in the Rijksherbarium. Suringar’s classification in some minor respects deviates from Kützing’s. Suringar is aware of the fact that many “species" of Algae might be nothing but states of development of other species. However, he emphasizes that as algology was still in its infancy the first necessity was to obtain a knowledge of the forms, as they are found in Nature, and of their natural relations. The last part of the manuscript gives a survey of about 150 algae collected by the author in spring and summer of 1854, 50 of which were new to the Netherlands. The collections, presented afterwards to the Nederlandsche Botanische Vereeniging, were made in Wassenaar, Leyden, Friesland and along the West coast of the Zuiderzee. This algological study served as a basis for Suringar’s thesis in 1857, in which he created a number of new forms and one new species: a Cyanophycea, which afterwards proved to be a synonym. Additions to this work appeared in the coming years, adding a number of new indigenous algae, freshwater as well as marine. A collection of marine algae, for instance, was made by him with the aid of his students in Den Helder. In 1874 a short communication by Suringar announced the discovery of a new parasitic alga, preliminary called Drepanothrix cingens. 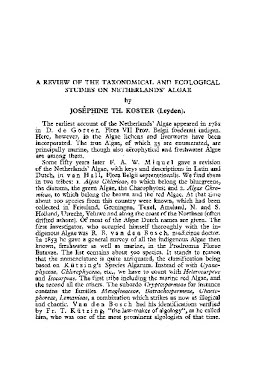