In my work for the Index Muscorum it became apparent that dating problems existed for publications of the years 1825-1827, which were important for the nomenclature of Musci. The article by Arnott, Nouvelle disposition méthodique des espèces de mousses, was indicated from 1825 in some sources, but the copy of the periodical consulted had the title—date 1827 and the fascicle conderned probably was issued in 1826, Bridel, Bryologia universa, had the internal date 16 Dec. 1826 in the preface, usually bound with vol.1 the year 1826 for this volume, therefore, could be doubted. Moreover a supplement to the same volume was apparently published later than the main text, but the date 1827, assigned to this part in the preparation of Index Muscorum, was not fully confirmed. Some of the 11 parts of Schwaegrichen, Species Muscorum ... Supplementum, had to be dated with more precision, in connection with other works, th than was possible during the work for the Index Muscorum. Within the framework of the project Bibliographic Huntiana of the Hunt Botanical Library, Pittsburgh, Pa., it was possible to select a chapter of botanical bibliography, and the bryological publications of these three years were chosen with the literature related thereto. An effort was made to trace every book containing names of Musci. Articles in periodicals were not checked as thoroughly as the books. To bridge the gap between 1825 and 1821, the last year studied by Dr. Sayre in her Dates of publications treating Musci ... , bryological publications of the years 1822-1824 were studied too, but no effort was made to treat this period exhaustively. The publications included in this thesis are described according to the method of descriptive bibliography, as developed by W.W. Greg, F. Bowers, and for botanical books by Allan Stevenson. This method is adapted to the problems of the books of the period, by omitting the description of some features (binding, type-font) and by using page references in the descriptions of the contents instead of signature references. Some refinements in the method are proposed and applied. A new key for determination of books of handmade paper, especially laid paper, is included, Information concerning the dates of publication was derived from the references to reviews and announcements in contemporaneous periodicals, collected by a team of workers of the Hunt Botanical Library; I checked the original sources in many cases which might be critical. Moreover I studied several manuscript collections in botanical libraries and in archives. Completeness in these two fields, reviews and manuscripts, of course, is impossible, but some important sources remained untapped because of time restrictions. The result is the first analytical bibliography of all publications on a plant group of a certain period, at least to my knowledge. A considerable number of dates of publication are given with more precision than was the case up to now. Some of the important solutions to special problems or new points which came to light are enumerated below. 1. The article of Arnott was published in no less than 5 variants. The first one certainly is the quarto separate, which has the title-date 1825. My research made it probable that this was issued in January 1826. The later variants may be of importance because of indirect references to Schwaegrichen and Gaudichaud. 2. The two volumes of Bridel: Bryologia universa, were indeed published in 1826 and 1827, as the titles indicate; however, the supplement to vol.1 and the preliminaries were published together with vol.2. 3. The several parts of Schwaegrichen’s supplements are placed in the chronological order with the other important publications. For some parts, however, more accurate dates would be welcome. 4. The relative dates of Greville: Flora Edinensis, and the relevant fascicle of his Scottish cryptogamic flora were better established than those used in the Index Muscorum. 5. The contents, of the fascicles of a number of books and periodicals were determined, mainly with the help of internal bibliographical evidence. These were in several cases not known to the last details, e.g. Hooker: Musci exotici and Exotic flora. Off-sets of fascicle-titles in a particular copy of the latter work were helpful in establishing the breaks and dates of some fascicles. 6. Some publications were found, of which the new names of Musci were overlooked in the bryological literature (Cambessèdes, Chevallier). 7. The first color prints of mosses, to my knowledge, are indicated: of protonema in T.F.L. Nees von Esenbeck, 1824, and of complete plants in Sommerfelt, 1826, and Chevallier, 1826. 8. Of several books cancellantia are described which were not yet indicated before, including some in the starting-point book, Hedwig: Species Muscorum frondosorum. 9. Wove paper, originally used for expensive paper states of books, apparently became available in larger quantities and at relatively lower prices in the period treated, since several books show a shift from laid to wove paper. Machine-made paper was not yet often used for books; I only saw this paper type with certainty in the Transactions of the Linnean Society [London] of 1827 (see Greville n.9). As a general result of this research I can discuss the development of bryology in the first three decades of the 19th century, stressing the application of the natural classification to bryophytes, and the diverse opinions on the life cycle of mosses. 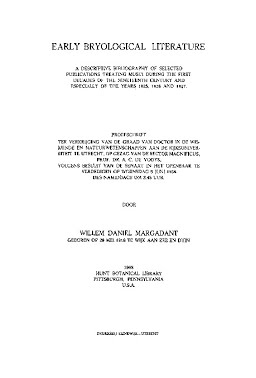