A revision of the Paronychiinae

This study was undertaken, in April 1964, at the suggestion of Prof. Dr. J. Lanjouw. The need for such a revision, was, however, stressed by the authors of the subtribe, viz. PAX et K. HOFFMANN, who, while delimiting these genera, remarked that the Systematics of both the (main) genera of this subtribe (viz. Paronychia and Herniaria) required a thorough study. By that remark they implicitly wanted to convey the difficulties encountered in studying the two genera. As a matter of fact theirs is the only account covering the whole group. There is no previous review of all the species of Paronychia, and CORE’s account (1941 of the 21 North American species is the only study of this genus. Herniaria has been studied by F. N. WILLIAMS (1896) and F. HERMANN (1937), but both the accounts are brief and sketchy reviews, and cannot be described as revisions. The present study was, therefore, undertaken to clear up the taxonomic position of these genera. The study was greatly facilitated by the extensive collections made by various workers (in some areas for the first time in history) in recent years, particularly during the past two or three decades. It is indeed immensely gratifying to note that well over 13500 herbarium sheets (about 10500 of them obtained on loan from nearly 45 herbaria) were available for study. A thorough examination of such a vast collection has necessitated a re-evaluation most of the infra-generic groupings, and, moreover, resulted in a considerable increase in the number of species belonging to the two main genera. Of the nine genera originally included by PAX et HOFFMANN in this subtribe, viz. Sphaerocoma, Corrigiola, Gymnocarpos, Lochia, Sclerocephalus, Paronychia, Siphonychia, Herniaria and Philippiella, only eight are retained in this account, the ninth (i.e. Siphonychia) is merged with Paronychia. The latter is subdivided (for the first time) into three subgenera (Siphonychia, Paronychia and Anoplonychia); the subgenus Paronychia includes 57 species of which all but one belong to the section Paronychia. The latter in turn comprises 5 sub-sections and 8 series, all of them being set up for the first time. The second major subgenus, Anoplonychia, includes 48 species grouped into two sections and four subsections. In all there are 29 species being described for the first time (20 in Paronychia, 7 in Herniaria and 2 in Corrigiola) in addition to a number of infra-specific taxa. These figures, however, do not include the taxa published by me in two earlier papers (1966, 1967). In spite of the extensive collecting, however, most of the new species as well as the infra-specific taxa are known from one or a few gatherings only, and are, accordingly, described in this account as endemics. Obviously, in some of these cases more material is highly desirable. Some regions are still rather poorly known or botanized. This is particularly true of Central and Eastern Turkey, NE Spain, and parts of Morocco, Ethiopia, Peru and Chile. Moreover, leaving aside matters of taxonomic interest, which I have endeavoured to clarify in this account, there still remain some problems which require further investigation. The main genera require population studies, and the evidence available so far for hybridization needs to be substantiated. Similarly, cytotaxonomic and experimental studies are needed to help solve some of the problems concerning the delimitation of the infra-specific taxa, especially in the genus Herniaria. Another highly intriguing matter that requires further investigation concerns the correct interpretation of the petals which in most of the genera of this group are filiform structures resembling staminodia, but in two of the genera (viz. Corrigiola and Sphaerocoma) they are quite well-developed. Yet another issue that still remains to be settled, though on a much broader scale, is the long-standing controversy as to whether or not these genera, along with the other members of the subfamily Paronychioideae, are sufficiently distinct from the rest of the family Caryophyllaceae so as to justify their inclusion in a separate family. This is a matter that cannot be settled by the study of a small group of genera, or a small tribe of a large family. I have, therefore, not gone into this problem, and have followed the treatment of PAX & HOFFMANN in the disposition of this group of genera. 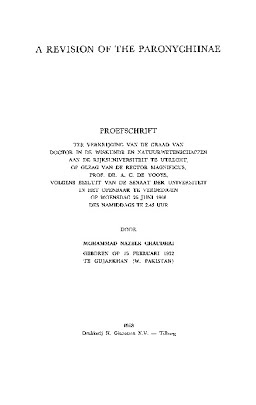