The cover-photograph depicts a so-called golden chicken, which is the apical part of the trunk, without the leaves, of the tree fern Cibotium barametz (Cyatheaceae). It was made by Dr. O. Kranendonk, professor of Tropical Medicine of the Royal Tropical Institute, Amsterdam, who had received it from one of his students, presumably from Sumatra, in September 1972. He kept it in a dish with some water in his livingroom, where in January 1975 it was still in much the same shape as first. When I showed the pictures to Mr. E. Hennipman of the Rijksherbarium, he told me that he had seen the curious creatures offered for sale at the Sunday market at Bangkok in September 1965, and showed me a pamphlet in Thai and Chinese that was given to the buyer. The photographer of the Rijksherbarium, Mr. B. Kieft, printed a portion of the Thai text in the background, and Mr. Tem Smitinand, during his visit to Leiden, kindly translated the text into English, which reads thus: ”This plant is sacred. It should be kept in households for good omen. Besides great beauty it also brings great luck. If you are a merchant you will do good business; if you are lucky enough you can become a millionaire. The hair of this plant can be used for various remedies such as wounds caused by a knife, axe and nails, or even dog bites, and scurvy, placing the hair on; and in case of hemorrhage in women, boil the hair, and drink the decoction. If at childbirth the placenta comes out, cover the hair with a cloth and burn it, then let the woman inhale the smoke. If you got diarrhoea or coughing vomiting with blood, use an amount of hair and boil it in water, then drink the decoction. To prevent contagion from animals, such as pigs, dogs, cattle, fowl, steep the hair in water, and utter a wish before feeding the animals. Keeping the plant in the house will ward off witchcraft, and bring in charm and luck. If you want to grow this plant, put it in the sand and then say a cantation in Pali: ’Kukusanto Namobudhaya’. This is the heart of the chicken. You have to give it five different kinds of food, depending on what you have. Keeping the plant in a revered place will help protect your family against danger. Having been planted for one month the plant should be sprayed or rubbed with liquor; in spraying, don’t use the mouth, and then the hair will keep growing all the time, and it will become more sacred. When you have this plant in your house, if there will be any benefit, you will hear a crying noise. When you hdve heard this noise, you will get good luck, depending on what you have wished. Before using the plant as a remedy to illness, you have to make wishes every time. If a woman is difficult in labour you can wish and place the hair of this plant in water and let the woman drink it. This will have good result, which has happened many times.” 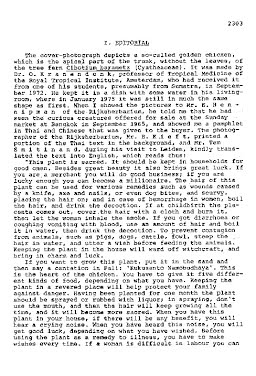