A Tragedy of Borneo

It was a nice and cool evening in October 1958, when we were sitting in all safety and comfort in the Resthouse at Ranau. The sky had cleared up and Mt Kinabalu dominated the scenery in all its rugged majesty. Mr D.I. Nicholson, the Ecologist of Sandakan, and I were to start next day to climb the mountain. The preparations had been made, and, lingering around, my eye fell on a booklet on the table. It was ”A Tragedy of Borneo 1941-1945”, and its subtitle was ”Kinabalu National Memorial Park Project”. While reading, I became deeply impressed. The Tragedy of Borneo began seriously in September 1944. Then the 2400 prisoners, 1800 Australians and 600 Englishmen, who had been kept in a P.O.W. camp at Sandakan, were driven by the Japs westward, into the interior, along a murderous track 150 miles long through the heaviest country, on a daily ration of 2½ ounces of rice, while the stores in Sandakan were packed with International Red Cross parcels, and while the American planes came over high in the sky, using the Kinabalu as a land mark, unaware of the terrible things that were happening on the ground. When in August 1945 the death march ended at the foot of the Kinabalu, the Imperial Army of Japan had massacred all these men, except for six Australians who somehow had managed to escape. While we made the ascent, I saw Mr Nicholson busy collecting data for the setting out of a National Park. This will comprise the summit of the mountain, and a good deal of its slopes. In the booklet, which I was very glad to see now again on my desk, this is explained extensively. For its objective is to seek approval and support for the following aims: ” 1) To commemorate in a more constructive way than War Graves Cemeteries are, by their nature, intended to do, a wartime disaster and recovery of deep national significance to Australia, Great Britain, and British Borneo. 2) To symbolize for posterity the close bonds of friendship, mutual respect, and common endeavour, which have always existed between the British and the indigenous people of Borneo, and which during World War II found frequent and courageous expression throughout the dreadful ordeal through which the country passed. 3) To focus historical interest on Kundasan (4000 ft) near Ranau on the slopes of Mt Kinabalu (13455 ft), the highest mountain in SE. Asia and the most imposing feature in all Borneo. Subject to other conditions being favourable, to work also towards the development of the area for the future benefit of native as well as British interests in Borneo.” 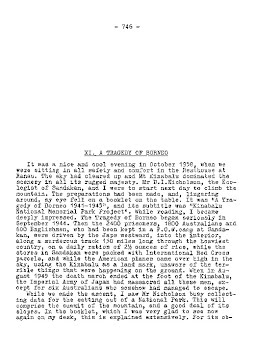