Expeditions and other exploration

During 1979 the Botanical Survey of India had again collections made, which we list in the same manner as on page 3195. In Andaman: Baratang I., Dhanikari, Great Nicobar I., Katchal I., Wright Myo, 1037 specimens. In Andhra Pradesh: Srikakulum District, 1314. In Arunachal Pradesh: Banderdewa, Doimukh and Selly Lake, Itanagar, 4272. In Assam 200 living plants. In Jammu and Kashmir: Dachigam Game Sanctuary, 1740. In Karnataka: South Kanara District, 2080. In Kerala: Agasthiakudam, Allepady, Aryankavu, Bonaccord, Cannanore, Chemunji, Erumeli, Idukki, Kasargod, Muthukulum, Nelliampathy R.F., Palghat, Silent Valley R.F., 10802. In Madhya Pradesh: Bilaspur District, Damoh District, 1400. In Maharashtra; Manyana District, Mahabaleswar, 3000; Kolaba District, Kolhapur, 4760. In Meghalaya: Cherrapunji, 66. In Panjab: Hoshiarpur, 1780. In Rajasthan: Bhilwara, Chittorgarh, Jalore, 3626. In Sikkim: Gangtok region, 1000. In Tamil Nadu: Anaikathy, S. Arcot, Kanyakumari, Madurai, Papamalai, Ramanathapuram, 5907. In Uttar Pradesh: Chamoli, Tehri Garhwal, 1300; Dehra Dun, Hemkund, 3230. Dr. K.M. Matthew, S.J., St. Joseph’s College, Tiruchirapalli 620 002, India, sent this note on The Carnatic Flora Project, Tamilnadu (Madras), S. India; ”The area under exploration is situated between 77°.45’—79°.45’ E. and 10°.50’—12°.50’ N. The significance of the choice lies in that the area is large enough to be a phytogeographical unit and small enough to be exhaustively explored by a private foundation in about six years’ time. By the term ’phytogeographical unit’ is meant that the vegetation of peninsular India excluding the evergreen is adequately covered in the tract: it comprises nearly every type of vegetation of the Deccan east of the western ghats — the hill ranges of the Pacchaimalais, the Kollimalais, the Kalrayans and the Servarayans (Shevaroys) rising to over 1500 m on the latter, together with the typical foothill scrub jungles, the deltas of the Ponnaiyar, the Cauvery and the Kollidam (Coleroon) rivers, mangroves (Picchavaram), the 50 km of coastal and dune vegetation (Chidambaram to Cuddalore) and a sector of the plains vegetation. In fact the coverage is so adequate and representative that the finished Flora will virtually represent the entire State of Tamilnadu, nay even the Deccan, excluding the evergreen element of the western ghats. Though this exclusion is a limitation in terms of extension, it is taken for a strength in that the constituent species will represent a welldefined and compact phytogeographical unit. 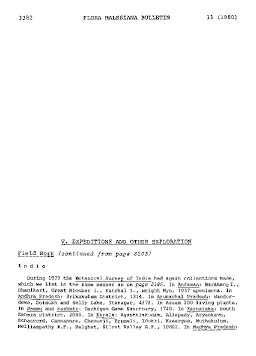