It is the genera of threatened plants that need attention

Plant species protection seems a popular concept nowadays, which leads to the preparation of Red Data Lists, and of sheets for recognition. Such an approach may be sensible in civilized temperate countries with a poor flora widely known; in the humid tropics it is out of the question. There are too many species, and neither books nor people are available to identify them, not to speak of implementation. Besides, dealing with species as isolated entities easily creates the impression that protecting such species would be of any help, to the neglect of the only effective way of conservation: wholesale protection of primary ecosystems. The latter concept, however, is difficult to convey to the public; it is too complex to create a lasting, vivid impression. To the Malesian botanist, who in the wake of C.G.G.J. van Steenis and M.M.J. van Balgooy has learnt to think in terms of genera (see Blumea Suppl. 6, 1971, 38-49) to make plant geographical counts and to judge progress in taxonomy, the concept of endangered plant genera presents itself naturally. It cannot, however, be regarded as the same thing as a species but in a higher rank. Durio as a genus is clearly in grave danger to be decimated by loggers, but nobody would think of forbidding the trade of durian fruits, or even of durian timber, a kind of softwood occasionally used for the crates in which our specimens are shipped. According to A.J. Kostermans (Reinwardtia 4, 1958, 357-460) who monographed the genus, there are 27 species, of which D. zibethinus is known only in cultivation. The nucleus of the genus occurs in west-Malesia, in Sumatra with 7 species, 0 endemic, in Malaya with 11 species, 5 endemic, in Borneo with 19 species, 14 endemic, and smaller occurrences around this area. Several species are known to have fine fruits, and it is evident that the gene pool must be preserved in the interest of breeding and genetic improvement, so that the spectrum of adaptation, resistance, and fruit quality is broadened. Similar examples can be worked out for Artocarpus, Citrus, Garcinia, Mangifera, Myristica, Musa, Nephelium, and others which are all outstanding as future losses if the governments in Malesia continue to allow their forests to be devastated under whatever pretext. 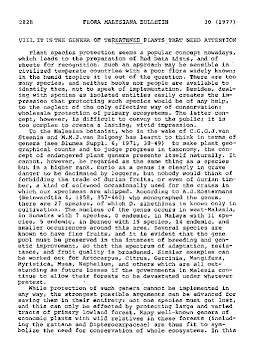