C. A. Backer & R. C. Bakhuizen van den Brink, Flora of Java, volume 2, will be published about New year 1966. This volume will deal with the second half of the dicots; the third and last volume will give the monocots. The 641 pages of text of this volume will be preceded by a 72-page essay by Dr. C. G. G. J. van Steenis under the title: Concise plant-geography of Java. The main contents of this essay are here listed: Very brief survey of collections and phytography (four periods are distinguished, marked by the years 1817, 1860, 1905). Brief survey of vegetation types (submerged littoral – mangrove – beach – lowland swamp forests – hydrophytic vegetation – rheophytes – dryland rain forest – montane rain forest – mountain- swamps – subalpine – vegetation – monsoon forest; 32 photographs for illustration). General statistics (wild species 4598, introduced 413, cultivated 1523). Comparison of the floras of west, central, and east Java (west 3882, central 2851, east 2717 native species). Number and distribution of epiphytes, parasites, and saprophytes through Java (epiphytes 701, confined to west 251, to central 22, to east 23; parasites 61; saprophytes 41). Floristic difference between the coastal floras of north and south Java and its explanation (lists of species confined to the north and to the south coast given; physiographic factors discussed). The floristic plant-geographical position of Java and its adjacent islands (Sunda Strait is an important barrier; Java has many wide-spread species; the Lesser Sunda Is. are Javanese in flora but poorer. The present paucity of South Malesia seems due to the monsoon climate, absence of certain soil types, heavy devastation of Java, and long isolation of the island. Kangean and Bawean differ but slightly from Java in their flora). Endemic genera and species in Java (at present only Grisseea of Apocyn., Heynella of Asclep., Semeiocardium of Balsam., and Silvorchis of Orch. left; the number of species is negligible). Representation of elements (Widely distributed in Java 630, in Malesia 685; Asia-centered J 402, M 616; Malesia-centered J 316, M 580; Endemic J 4, M 298; Eastern-centered J 18, M 137). Altitudinal distribution (three tables with highest and lowest localities for the genera every 100 m; altitudinal deviations discussed for species which occur occasionally higher and lower than normal; regional shift of altitude; altitudinal differences through racial segregation). Climate and flora in Java – Plants as climate indicators (contains a comparison of the merits of the climate scales by Van Bemmelen, Mohr, and Schmidt/ Ferguson, by application of 73 species to the drought classes of these authors; 164 species have been listed as indicators of an everwet climate). Many references have been added to each chapter. Address of the publisher: P. Noordhoff, P.O. Box 39, Groningen, Netherlands. 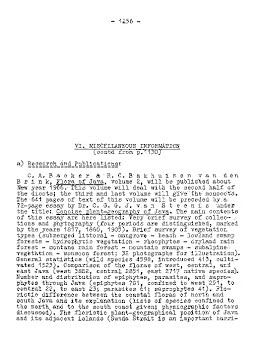