The study of minor forest products

Rattans as an example. — ’Minor’ are called all forest products other than timber. Rattan is one of the best-known. In Malaya, according to Dransfield in his book of 1979, there are 104 species; 54 of them are utilized for cane. In addition, 4 are sought for their edible fruits, 5 for their leaves (as thatch and for cigarette paper), 4 for their ’dragon blood’ (jernang, used for varnish, red dye, and medicine), 4 have still other uses. This means that over 2/3 of the Malayan rattans are useful to some extent. At present, we can say that ’great’ use is made of 12 species, that is more than 1 in 8. Of all species, the stock is in the primary rain forest. For Indonesia, M.H. Simatupang presented a paper The processing of rotan, a minor forest product from the tropical rain forest, to the 8th World Forestry Congress (1978) summarized on page 3222. The total yield was 59,600 tons a year, of which 7000 tons from plantations. The value of rattan in the world trade is enormous: Dransfield (in The biological aspects of rare plant conservation, edited by H. Synge, 1981) adopts an estimate of US$ 1.2 billion, end value, and adds: ”Rattan is in fact the most important forest product after timber in southeast Asia. From a social point of view it is the most attractive forest product, tending to benefit local villagers much more directly than timber operations. Traditionally the exhausting and unpleasant task of rattan pulling is carried out during slack agricultural periods (such as after harvest and before sowing the rice crop) and is also greatly influenced by the current price of rubber; when rubber prices have slumped, rattan pulling has become a more attractive source of income” (p. 180). Dransfield (ibidem, p. 181) credits Borneo with c. 151 species, Malaya with 104, Sumatra with 77, Thailand plus Indo-China with 62, the Philippines with 60, New Guinea with 52, Celebes with 28, Java with 26; his Short Guide to Rattans of 1974 gives 9 for the Moluccas and 2 for the Lesser Sunda Islands. If similar percentages as in Malaya are useful, one can form an impression. 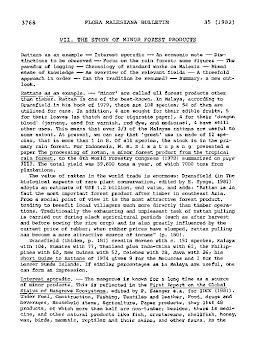