Under the funding from the United States National Cancer Institute (NCI)¹, a program was undertaken to collect plant samples in Southeast Asia to be tested for their cancer- and AIDS-arresting properties, for the period of September 1, 1986 through August 31, 1991. The program was implemented with the collaboration of the Arnold Arboretum and the Bishop Museum. Botanists from these and other institutions collaborated in the field work operation for the program, among others: J.S. BURLEY (A), B.C. STONE (BISH), D.G. FRODIN (Philadelphia), F.-C. HO (HCT), D.A. MADULID (PNH), W. MEIJER (KY), T. SMITINAND (BKF), E. SOEPADMO (KLU), W. TAKEUCHI (BISH), E. WIDJAJA (BO), and W.J.J.O. DE WILDE (L). During the 5-year period, 35 botanical collecting trips of 4-12 weeks duration were carried out in the tropical rain forests of Thailand (265 collection numbers), Malaysia (Malay Peninsula, Sarawak, Sabah; 964), Taiwan (43), the Philippines (Luzon, Panay, Mindoro, Palawan; 1360), Indonesia (Sumatra, Kalimantan, Sulawesi, Seram, Irian Jaya; 878), and Papua New Guinea (463). More than 10,000 plant samples, each 400—1000 gram dry weight, were collected and delivered to the NCI Frederick Cancer Center (Frederick, Maryland, U.S.A.) under a USDA special import permit. Every one of these samples was specially numbered and documented with properly labeled voucher herbarium specimens. These voucher specimens were processed at the John G. Searle Herbarium of the Field Museum of Natural History, Chicago, and were distributed to, among others, the following herbaria: A, F, L, and US; a set of relevant duplicates was also deposited in the herbarium of each host botanical institution in the respective country of collection. A database of the collection (DBase 3+, IBM PC XT/AT) is maintained both at the University of Illinois at Chicago and at the NCI’s Frederick Cancer Center. More than 2,500 species of flowering plants, belonging to more than 1,000 genera in 214 families (based on the family concept used in Willis and Airy Shaw, Dictionary of Flowering Plants and Ferns, 1980) were collected. Seventy percent of the collection has been identified to species. Although field ethnobotanical inquiries on the medicinal uses of the plants collected have not been extensively made, many plants collected do have information on their folk medicinal uses. 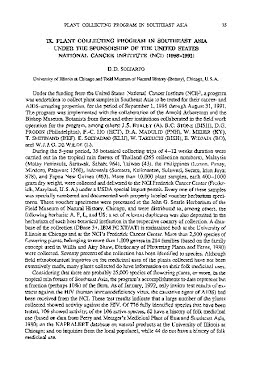