At a dinner given by Mrs and Br Verdoorn for the co-editors of Chronica Botanica during the AAAS-meetings at Boston, Mass., Dec. 29thm 1946, Dr. E. D. Merrill was awarded the honorary membership of the Botanic Gardens, Buitenzorg, Java, for 1946, on the occasion of the 129th anniversary of these Gardens. On behalf of the director, Prof. Dr L.G.M. Baas Becking, Br van Steenis, in a speech, gave a sketch of the prominent contributions towards the Malaysian flora, which Dr Merrill accomplished in the course of the past 45 years. He is now the greatest living authoritynon the SE Asiatic flora. At present he is finishing a revised bibliography on the Pacific Floras, in cooperation with Br Walker, and the past few years he spent in unearthing the papers of Rafinesque and in identifying the scores of new genera described and typified by that erratic biologist. The huge work is now finished; Dr Merrill ”felt nearly licked by Rafinesque” as he told us. Dr Merrill who is still in the prime of his life, and who will in the future not be burdened by extensive administrative duties, will, we hope, largely devote his energy to the study of the SE Asiatic flora in general, and to that of Malaysia, which is his speciality, in particular. Prof. Lam wrote a tribute to Dr Merrill (Natuurwet. Tijdschr. Ned. Ind. 102 (1946)153); the journal, its name now being changed into ”Chronica Naturae” is edited by the Roy. Science Society of the Netherlands Indies of which Dr Merrill is a corresponding member, number 4 of vol. 27 (1946) of the Journal of the Arnold Arboretum, Harvard University, and Chronica Botanica vol. 10, nos. 3/4 (1946) were dedicated to Dr Merrill on the occasion of his 70th birthday. Ihe first Mary Soper Pope medal of the Cranbrook Institute of science, Michigan, had been awarded, Dec. 12, 1946 to Dr Fr. Verdoorn, editor of Chronica Botanica, Waltham, Mass., our greatest living authority on Malaysian hepatics. 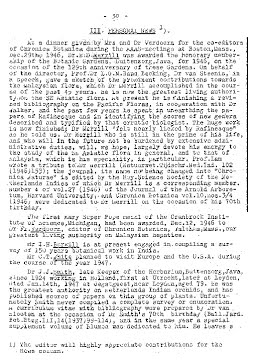