Halophobous, aquatic or palustrial perennial herbs, rooting in the mud or freefloating. Stem erect or floating, solid, with numerous air-chambers as are the petioles. Leaves rosulate or alternate, or solitary at the top of the stem, emersed, floating or submerged, broad or narrow, curvinerved (when emersed); petioles sheathing at the base. Flowers ♀, ephemerous, mostly in racemiform, spiciform, subumbelliform or paniculiform inflorescences which are subtended by 1-2 spathelike or tubular leaf-sheaths, rarely solitary or pairwise in the leaf-axils. Bracts minute or absent. Flowers often simultaneously or centrifugally expanding. Perianth choriphyllous or gamophyllous, 6-merous, actinomorphic or zygomorphic, blue or lilac, rarely yellow, after anthesis marcescent and tightly including the ovary or the fruit. Stamens 6 or 3, rarely 1, on the base, in the tube or in the throat of the perianth, often unequal; filaments free; anthers 2-celled, cells bursting lengthwise, rarely opening by pores. Ovary superior, sessile, 3-celled, with axile placentas or 1-celled with 3 parietal or with 1 apical placenta. Ovules numerous or 1 and then pendulous from the apex of the cell. Style 1; stigma entire or minutely 3-lobed. Fruit a 3-valved capsule or indehiscent. Seed(s) longitudinally ribbed. Embryo central, terete, straight, hardly shorter than the copious, mealy endosperm. Distr. About 8 small genera and ± 25 species, 6 genera confined to the New World, one in Madagascar, one widely distributed in the Old World; in Malaysia one native genus, one introduced and abundantly naturalized, and one occasionally cultivated as an ornamental. 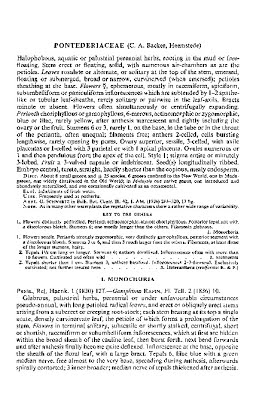