Perennial herbs with tufted or creeping rhizome, monoecious, rarely dioecious. Stems arising centrally or laterally, erect or obliquely erect, mostly triquetrous or trigonous, rarely subterete, solid or sometimes hollow, often clothed at the base by persistent leaf-sheaths or their fibrous remains. Leaves tristichous, usually narrowly linear, sheathing at the base, with a ligule at the junction of blade and sheath, rarely lanceolate or elliptic with a more or less distinct petiole and eligulate, mostly basal and subbasal, 0-several higher on the stem, the lower ones often reduced to bladeless sheaths; sheaths of the stem-leaves and bracts closed. Inflorescence paniculiform, racemiform or spiciform, more rarely reduced to a single spikelet. Spikelets 1-very numerous, terete, sessile or peduncled, few- to many-flowered, wholly male, wholly female, or bisexual (androgynous when male flowers above, gynaecandrous when female flowers above). Bracts foliaceous or glume-like, often sheathing, sometimes wanting. Base of the branches of the inflorescence usually with a utriculiform or ocreiform bracteole (cladoprophyllum) surrounding it. Flowers unisexual, naked, solitary in the axils of the spirally arranged glumes; male flowers consisting of 3 free or rarely more or less connate stamens; anthers linear; female flowers consisting of a single pistil enclosed in a bottle-shaped prophyll (;utricle, perigynium). Style either continuous with the ovary and persistent, or articulated with it and deciduous, straight or flexuous, often incrassate at the base; stigmas 2 or 3, protruding through the small terminal orifice of the utricle. Vestigial rachilla (see Uncinia) rarely present. Utricles membranous, chartaceous, or coriaceous, bicarinate, sometimes winged, sessile or stipitate, beakless to strongly beaked, nerveless, nerved, or ribbed, glabrous, or pubescent or hispid, papillose or puncticulate or smooth, sometimes spongy at the base; beak truncate, obliquely cleft, bidentate, or bifurcate at the top. Nut trigonous (when stigmas 3), or lenticular (plano-convex or biconvex; when stigmas 2), enclosed within the utricle. Distr. A large genus with 600 to 1000 spp., the majority of them outside the tropics. However, the most primitive section, Vigneastra with a compound, paniculate inflorescence and androgynous spikelets, occurs mainly in the tropics of the Old World, from sea-level up to 3000 m. This section is represented in Malesia with 11 spp., and is there by far the largest section. 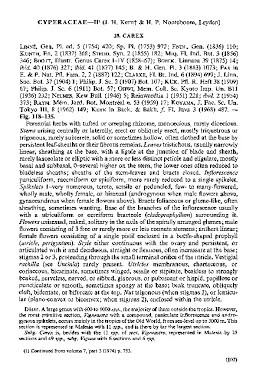