Trees or shrubs. Leaves spirally arranged or often distichous, sometimes crowded towards the top of the branchlets, simple, entire or crenate or serrate, crenations mostly glandular; petioles often thickened at the base and (or) the apex. Stipules small, rarely large and foliaceous, often early caducous, or wanting. Inflorescences subterminal or mostly axillary, sometimes on the old wood, in often spike-like racemes or in panicles or in short cymes, but sometimes condensed to glomerules or reduced to few-flowered fascicles or even to a solitary flower, apparently essentially cymose. Flowers bisexual or unisexual, in the latter case mostly dioecious, sometimes polygamous, actinomorphic, 3- to polymerous, cyclic (with sepals and petals) or rarely spiral (with perianth segments, in trib. Oncobeae). Pedicels often articulated near the base. Sepals 3-6, rarely more, mostly persistent, sometimes accrescent, imbricate or valvate, free or connate at the base into a calyx-tube, or calyx closed in bud and disrupting in different ways. Petals 3-8, rarely more, free, imbricate or valvate, mostly alternating with the sepals and caducous, sometimes persistent and accrescent, often inserted on the margin of a hypogynous or nearly perigynous disk, or absent. Receptacle often deepened in the centre, mostly with appendages such as an extrastaminal disk or disk-lobes, free glands between the stamens, or a corona of 5 phalanges, each of which is consisting of fine barbate threads, or staminode-like scales inserted on the inner side of the base of the petals, or with true, mostly barbate, staminodes. Stamens 5 to ~, hypogynous, mostly free, rarely the filaments connate into a column; anthers with 2, longitudinally dehiscent cells; connective sometimes with a short appendage. Ovary mostly free, rarely semi-inferior, unilocular with (2-)3-5(-8) parietal placentas, sometimes incompletely 2—8-celled by the deeply protruding placentas; ovules 2 to numerous, anatropous. Styles 1-10, free or connate; stigma sessile. Fruit a fleshy or dry berry or a capsule, rarely a drupe, 1- to many-seeded. Seeds sometimes arillate, with abundant endosperm; embryo straight; cotyledons mostly broad, foliaceous. Distr. About 84 genera with c. 1300 spp., nearly all woody, predominantly in the tropics, rapidly decreasing in number towards the subtropics, 2 genera with a total of 9 (mostly Chilean) spp. in the temperate zones of S. America. 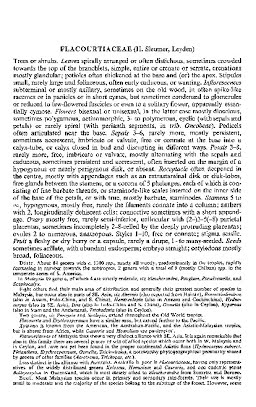