Trees, shrubs, lianas or perennial herbs. Leaves spirally arranged, opposite in one species only (Madagascar). Blade simple or, rarely, (only in Acrotrema) to threefold pinnatisect. Stipules absent, but in Acrotrema and a number of species of Dillenia petiole with stipule-like, often wholly or partly caducous wings. Inflorescence cymose or racemose, sometimes reduced to a single flower, terminal or axillary. Flowers ♀♂, actinomorphic to (mainly in the androecium) zygomorphic, hypogynous, mostly yellow or white. Sepals (3-) 4-5 (-20), imbricate, persistent in fruit. Petals (2-) 3-5 (-7), caducous usually within half a day after opening of the flower, imbricate in bud, all equal, apex rounded or emarginate. Stamens ~-3, often partly staminodial, free or partly coherent by their filaments, centrifugal. Anthercells basifix, oblong to linear, opening with an apical pore or a longitudinal slit. Carpels 1-±20, free or connate along the central axis only, with free styles. Ovules ~-1, anatropous, apotropous, on an axile placenta. Fruit dehiscent or indehiscent, in the latter case permanently enclosed by the sepals. Seeds arillate or with a rudimentary aril, with abundant endosperm and a minute, straight embryo. Distr. Ca 10 genera, of which one circumtropical (Tetracera), 3 confined to tropical S. America, one in the Old World tropics from Madagascar to the Fiji Islands (Dillenia), one endemic in Ceylon (Schumacheria), one in S. India, Ceylon, and the Malay Peninsula (Acrotrema, fig. 5), one endemic in Borneo (Didesmandra), one endemic in Australia ( (Pachynema), and one on the southern hemisphere from Madagascar to the Fiji Islands, mainly in Australia (Hibbertia, fig. 3). Many species are relatively limited in distribution, none is distributed throughout Malaysia. 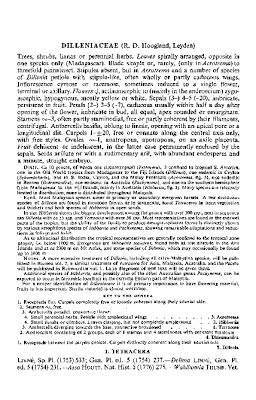