Shrubs, small trees, or lianas, in Malesia evergreen, or herbs. Stipules present. Leaves in Malesia spirally arranged, sometimes distichous, simple, the margin often shallowly incised; generally stalked. Inflorescences axillary variously modified bundles, or racemes, or panicles, sometimes terminal, or flowers solitary in the leaf axils; bracts small; pedicels often articulated, whether in the lower or in the upper part; bracteoles, if present, small and in the lower part of the pedicel. Flowers bisexual or rarely dioecious, actinomorphic or zygomorphic, particularly in the corolla; the parts often persistent in fruit. Sepals 5, the median one adaxial (posterior), free or occasionally for a small portion connate, often ciliate. Petals 5, free, generally sessile, the median one abaxial (anterior), often longer and differently shaped, the base then mostly with a sac or spur. Androecium often cylindrical, stamens 5, episepalous; filaments often more or less connate into a tube, in the Malesian genera with zygomorphic flowers, those near the odd petal with a recurved fleshy appendage; anthers introrse, in Malesia nearly always the connective at the top produced into an approximately triangular membranous appendage converging with the others, cells sometimes with a small appendage at the top. Gynoecium superior, sessile, ovary small, subglobose, one-locular, with generally 3 carpels, the median one adaxial, each carpel with a parietal placenta in the middle bearing 1-many anatropous ovules; style straight or, in the zygomorphic flowers S-shaped with the stigma curved towards the odd petal and club-shaped with variations. Fruit in Malesia capsular, the carpels thickened to boat-shaped leathery or woody valves (in the latter eventually the endocarp separated from the pericarp) which spread and often compress upon dehiscence. Seeds 1-many, sessile, one to a few mm in size, often with distinct raphe, sometimes with funicular outgrowths; rich in endosperm; embryo straight. Distribution. A pantropical family; only Viola is cold-loving. Hybanthus extends into the subtropics‘ so does Melicytus (Pacific Plant Areas n. 103, Blumea Suppl. 5, 1966) in Polynesia and New Zealand. Hymenanthera (congeneric with the former? l.c. n. 104) is temperate in SE. Australia and New Zealand. Number of genera 16, 8 of them American; the largest are Viola, currently credited with c. 400 spp., Rinorea with c. 200, Hybanthus with perhaps 70, and there are about 50 more in the other genera altogether. Total number of species c. 720, in Malesia 31, two of these introduced. 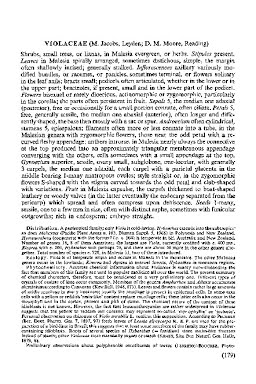