In the Netherlands as well as in adjacent countries Carex pulicaris is a strongly declining species. It is mainly known as an inhabitant of little or not manured fen-meadows (Junco-Molinion). Besides there are a limited number of localities of C. pulicaris in the dunes, and in one of these (on the Wadden island of Texel) it thrives in abundance. ‘Relevés’ are presented from all Dutch dune areas where the species still occurs (table 1). Various kinds of habitats may be distinguished: 1) Older stages of Schoenus nigricans vegetation in marshy dune-slacks. Carex pulicaris forms rather luxuriant, dense clumps notably on tussocks of (living or dead) Schoenus. Thus its roots generally remain somewhat ahead of the water-table. This kind of vegetation with C. pulicaris is found on Texel and in a fragmentary form on Schiermonnikoog (tabel 1, columns 5 and 6). 2) Margins of moist, leached dune-slacks, the age of which is at least half a century. The influence of groundwater is visualized by the colour of the turf, especially in summer. Carex pulicaris is generally limited to the upper belt of the green, moist turf, bordering on the brown, dry turf of adjacent dune-slopes. Generally this belt is just ahead of inundations (except perhaps in wet winters). Localities of this kind are met with on Texel, Schiermonnikoog and the former Wadden island – now part of the mainland coast – of Callantsoog (tabel 1, columns 7, 8 and 9). 3) Valleys in old pastures in the inner dunes (‘vroongronden’). This kind of habitat is a variant of type 2, differing mainly by a long tradition of grazing. Vegetation is often quite rich in species. Plant species normally characteristic of dry habitats (table 1, group 11 and in part also group 10) are found side by side with those of wetter habitats, which might be ascribed to lowering of mutual competition by grazing. Such ‘vroongronden’ with C. pulicaris are found in the south-west of the Netherlands, viz. on Goeree and – in a much poorer form – on Schouwen, while on the Wadden island of Ameland a site was observed quite similar to those on Goeree (tabel 1, columns 3,10 and 4, respectively). 4) Moist hay-fields at the inner side of the dunes of Callantsoog and Schiermonnikoog (table 1, col. 1 & 2). In the last three kinds of habitat C. pulicaris forms looser tufts than in Schoenus marshes, and its leaves tend to take a more horizontal position. Its way of dispersal is suited to various habitats, its ‘jumping’ fruits enabling the species to migrate from tussock to tussock, while they might also be transported by grazing mammals (the sharp ‘beak’ of the fruit caught in their pelt). Syntaxonomical groups accompanying C. pulicaris in all of its localities in the dunes are characteristic species of the Molinio-Arrhenatheretea and the Violion caninae (table 1, groups 7 and 9, respectively). This combination is also met with in the Junco-Molinion, so that in syntaxonomical respect the species behaves in the dunes in the same way it does elsewhere in the Netherlands. In part of its localities it is accompanied by species characteristic of calcareous mires (Caricion davallianae; table 1, group 5), and in some of these localities (notably on Texel) its shows a striking vitality, but in half of the sites of C. pulicaris in the dunes no such species are present at all. Therefore C. pulicaris cannot be considered characteristic of the Caricion davallianae. Its intolerance of longer inundations makes clear that it is no Parvocaricetea species either (compare the low abundance of species of group 3 in the table). A comparison with data from Central Europe, the British Isles and Scandinavia makes clear that C. pulicaris has a lower moist demand near the coast than it has in the interior. In Central Europe it is mainly found in marshy sites in hilly or mountain districts, where both supply and discharge of water are well ensured, a kind of habitat very rare in a lowland country like the Netherlands. 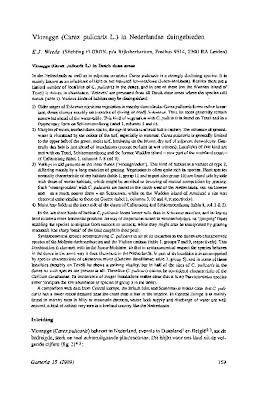