Alstonia is the largest and most widespread genus of trees and shrubs in the subtribe Alstoniinae of the tribe Plumerieae of the Apocynaceae. Many of its species provide important timbers of commerce, and several species are used in traditional local medicine. The genus occurs in Central America, tropical Africa, and from the Himalayas and China to New South Wales in Australia, and has its centre of diversity in the Malesian region. This study aims to contribute to our still fragmentary knowledge of the tropical biodiversity, and provides a comprehensive survey of the macromorphological and pollen morphological diversity within the genus Alstonia (Chapter 2), a cladistic analysis based on this diversity (Chapter 3), a comparative wood anatomical study of three of the five sections with analyses of ecological and phylogenetic trends in the wood anatomical data (Chapter 4), and a full taxonomic revision of the entire genus (Chapter 5). In the taxonomic revision 43 species are recognised; five of them are new to science, including one which has previously been considered as var. annamensis of A. angustifolia. The five new species are A. penangiana, A. annamensis, A. beatricis, A. breviloba, and A. rubiginosa. Several species and taxa below the species level are reduced. For instance, A. brassii Monach. and A. glabriflora Markgr. appear to be synonyms of A. macrophylla Wall, ex G. Don; A. montana Turrill, A. reineckeana Lauterb., A. roeperi Van Heurck & Müll. Arg., A. vitiensis Seem., and. A. marquisensis M.L. Grant to be the synonyms of A. costata (G. Forst.) R. Br. No taxa below the species level are maintained. Regional and synoptical keys to all taxa are given. Species descriptions incorporate full synonymy and data on geographical distribution, habitat and ecology. For most species notes are added to explain the variation of characters and/or to point to the differences with other taxa. Uses (especially medicinal) and vernacular names are given when known. An identification list of all c. 4,200 specimens examined is given. The cladistic analysis, based on 68 characters (61 macromorphological and 7 palynological), using the closely related genus Dyera as outgroup, produced a single most parsimonious tree. The tree shows five distinct monophyletic groups which are maintained as the five sections recognised in the present study: Tonduzia, Monuraspermum, Alstonia, Blaberopus, and Dissuraspermum. Tonduzia, previously treated as a separate genus (Pittier, 1908), is nested in the cladogram, and is therefore treated here as a section of the genus Alstonia. The previously recognised section Winchia (Monachino, 1949) has to be united with section Alstonia. The cladogram is accepted as a working hypothesis for the phylogeny of Alstonia and the character transformations leading to the present morphological diversity are discussed. The three sections that have been studied wood anatomically are Monuraspermum, Alstonia, and Dissuraspermum. The wood anatomical characters support the infrageneric classification recognised on the basis of macromorphological and pollen morphological features. Vessel frequency, mean tangential vessel diameter, L/D ratio, ray frequency, presence or absence of laticifers, parenchyma distribution, fibre wall thickness, and fibre wall pitting are all, in various degrees, diagnostic to separate the light Alstonia timber group (= section Alstonia) from the heavy Alstonia group (including the other two sections studied). The sections Monuraspermum and Dissuraspermum can be separated on vessel frequency and mean tangential vessel diameter. Among the light Alstonia group, the swamp-inhabiting species have lower multiseriate rays than the non-swamp species presumably rooting in well-aerated soils. Among the species of the heavy Alstonia group (sections Monuraspermum and Dissuraspermum), the small trees and shrubs show a higher vessel frequency, smaller vessel diameter, shorter fibres, higher ray frequency, and higher multiseriate rays than the species growing into big trees, confirming a well-documented general trend of wood anatomical correlations with plant size and stem diameter. Mutual correlations of character pairs such as vessel diameter and frequency, and quantitative ray and vessel attributes are also analysed and discussed with reference to findings in other woody plant families. 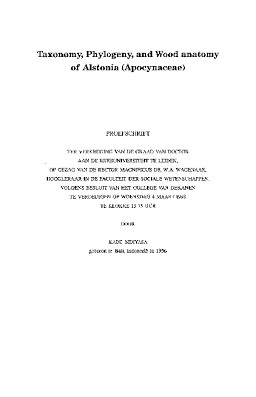