The influence of Algae on the natural environment

In the development of the various scientific disciplines certain contacts have been established between neighbouring sciences, while other endeavour still proceeds almost on its own. The study of the influence of the environment on chemical reactions has given us a large part of physical chemistry, while the inverse, the study of the influence of chemical reactions on the (natural) environment has been, in the last decades, developed as geochemistry. Much of our physiology and ecology deals with the influence of the environment upon the organism, while the inverse, the influence of the organism upon the natural environment (geobiology) has hardly been studied systematically. This influence is great, as already realized by Pasteur a century ago. Moreover, this study completes the picture of the relations of “give and take” between the organism and its milieu and the author believes that a true ecology should concern itself with the mutual relations between organism and environment rather than view the landscape (or seascape) entirely from the biological point of view. Blumea twice before has been so kind as to accept ecological notes from the author of this paper. Because of the interest Professor Lam has always taken in this ecological approach, the author hopes that this short note will not be a complete dissonant in the, chiefly taxonomic, matter contained in this volume. By a study of the influence of various groups of organisms on the estuarine environment Baas Becking and Wood (1) arrived at the conclusion that, primarily, the following groups are of geochemical importance; sulphate-reducing bacteria, thiobacteria, purple bacteria, iron bacteria and algae. The limits of the potential algal environment surpass the regions of most other groups, the thiobacteria excepted. The range of conditions in which algae may occur, be it temperature, salinity, pH or electrode potential is very wide indeed. Algae occur in all aqueous environments; evaporate, geothermal, soft and hard freshwater, estuarine and marine water and also in buffered and non-buffered products of pyrite oxidation (Baas Becking, Wood and Kaplan, 4). The author recently isolated, from mirabilite at Mawson Base, Antarctica, a green polyblepharid while Kaplan (12) describes the occurrence of bluegreens at 86°C in the hotsprings of the Rotarua district, N—Z. From this same region Kaplan described a Navicula at pH 1.2, while several algae occur in a solution of trona (sodium carbonate-bicarbonate) at pH 10.55. The above anecdotical remarks only serve to illustrate the extent of the algal potential milieu. 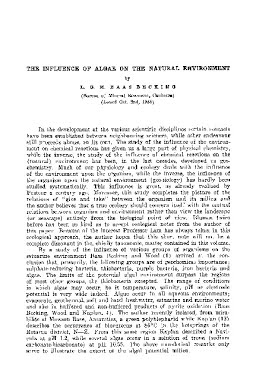