Additions to the genus Acoridium

The genus Acoridium is characterized by an extraordinary history. The original species, A. tenellum, a native of the Philippine Islands, was described at length from a fruiting specimen in 1843 by Nees von Esenbeck and referred to the Philydraceae. This treatment was prompted by the aspect of the plant, its vegetative structure and the mature seedcapsule adnate on the upper part of the elongated, sedge-like leaf. In 1843, Endlicher (Mant. Gen. Pl. Suppl. 3:59) transferred the genus from the Philydraceae to the doubtful genera of the Burmanniaceae. Until 1879, Acoridium remained a puzzling and inadequately understood concept, and then Boeckler [Flora 62 (1879) 158] placed it in the Cyperaceae, assigning to it a position between Scirpus and Eleocharis, depending entirely for his interpretation on the fruiting type preserved in the Berlin Herbarium ¹). In 1880, Bentham and Hooker referred Acoridium to the genera dubia vel exclusa at the end of their treatment of the Cyperaceae in their ”Genera Plantarum” (3: 1043). This was the situation toward the close of the nineteenth century when Mr C. B. Clark of the Kew Herbarium, after a careful study of the type specimen, concluded that it was not a member of the Cyperaceae. With the hope that its identity might be established, he submitted the type specimen to Mr R. Allen Rolfe who was engaged in critical research among Philippine plants. Fortunately Rolfe was a keen orchidologist. He recognized the plant as being equivalent to a doubtful Philippine orchid which had been erroneously referred to Ceratostylis gracilis Bl. by Andrés Naves (in Blanco, Fl. Filip. ed. 3, Nov. App. 245). However, Rolfe was unable to establish the identity of the doubtful species, because for this purpose flowerless specimens were quite inadequate. At about this time botanical exploration of the Philippines was progressing rapidly as a result of the American occupation of the Islands following the Spanish War of 1898, and A. Loher, a man with a deep interest in orchids, submitted to Rolfe, among other specimens, flowering plants that where clearly referable to Acoridium tenellum. Then it became clear that Acoridium was congeneric with Platyclinis, an orchid genus of long standing and of some horticultural prominence. But as Acoridium antedated Platyclinis, Rolfe accepted it and renamed some thirty-two species of Platyclinis [Orch. Rev. 12 (1904) 219], and over night as it were, from obscurity and uncertain rank Acoridium became a living concept, properly placed in the Orchidaceae. Almost simultaneously with Rolfe’s nomenclatorial revision in 1904, J. J. Smith, the eminent orchidologist of Buitenzorg, with characteristic thoroughness, published his monographic studies of Platyclinis and Dendrochilum (Uebersicht der Gattung Dendrochilum Bl., in Recueil des Travaux bot. Néerl.), merging these genera and reducing Platyclinis to synonymy. As Dendrochilum had been established by Blume in 1825, Rolfe’s new combinations under Acoridium passed into synonymy. Beginning in 1904 (the year in which Rolfe reduced Platyclinis and J. J. Smith monographed Dendrochilum), my interest in the question was being constantly stimulated by a steady stream of Philippine species which were coming in for identification from the Bureau of Science at Manila. In 1908, I published a complete treatment of the Philippine species of Dendrochilum known up to that time and gave my reasons for adopting the view that Acoridium and Platyclinis should be recognized as generic sections. But in restudying the whole matter thirteen years later, with an abundance of material to guide my conclusions, I reëstablished Acoridium as a valid genus, assigning to it those species which had been set apart as a section under Dendrochilum with Acoridium tenellum as the sectional type. 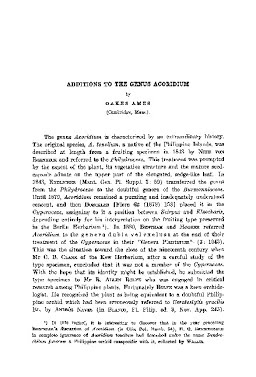