Notes on the Rubiaceae of tropical Asia

The genus Rutidea was founded by De Candolle in 1807 on a West African plant. Twenthy-three years later in the ”Prodromus“ (IV, p. 495, 1830) he tentatively admitted a second species: it was based on a plant from Penang which he had seen in Blume’s herbarium, where it was labelled ”Rutidea? mollis Bl.“. Subsequently several other species have been added, but as none of them were Asiatic, it was, perhaps, no wonder that Bentham and Hooker f. in their ”Genera Plantarum“ (II, 1, p. 116, 1873) made no mention whatever of Blume’s plant, and regarded the genus as confined to tropical Africa. Hiern, who in the ”Flora of tropical Africa“ gave an excellent description of the genus, and enumerates ten species from tropical Africa, said that it is known from Madagascar also, but he too omitted every reference to its occurrence in Asia. Lemée (Dict. d. Pl. Phan. V, p. 903, 1934) also declares that the genus, which now comprises 25 species, is confined to tropical Africa and Madagascar¹). Blume’s plant was more fully described by Miquel in his ”Ecloge Rubiacearum Archipelagi Indici“ Ann. Mus. Bot. Lugd.-Bat. IV, p. 256, 1869). It is not mentioned, however, in Hooker’s ”Flora of British India“. Boerlage’s remarks on it in his ”Handleiding“ (II, 1, pp. 107 et 142, 1891) also passed unnoticed; at least neither King and Gamble’s ”Materials for a Flora of the Malay Peninsula“ nor Ridley’s ”Flora of the Malay Peninsula“ contain any reference to the plant. This want of recognition is all the more remarkable as the original diagnosis published by De Candolle did not contain anything which would have justified its exclusion from the genus. It is true that Miquel’s more detailed analysis describes the seed as ”sectione transversa semilunale introrse valde concavum“, which sounds ominous, as the seed of Rutidea is globose, but he adds ”nondum maturum“, and it might be possible, therefore, that the unusual form was but a passing stage in its development. 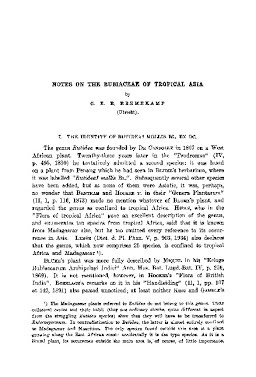