Cladistic and Biogeographic Analyses of Arytera Blume and Mischarytera gen. nov. (Sapindaceae) with Notes on Methodology and a full Taxonomic Revision

A taxonomic revision of Arytera Blume is presented, together with a cladistic analysis. On the basis of this analysis, a new genus is recognised, Mischarytera gen. nov., to accommodate the species A. bullata, A. lautereriana, and A. macrobotrys. The necessary new combinations are made. A new classification for Arytera at infrageneric level, also based on the cladistic analysis, is given. Two sections are recognised, Azarytera and Arytera; the latter is further divided into three subsections, Arytera, Distylis subsect. nov., and Pacifica subsect. nov. One new species is described ( A. nekorensis) and one new combination is made ( A. neoebudensis). General, regional, and synoptic keys to all taxa are provided, as are detailed descriptions of the species. Next to macromorphological characters, leaf anatomical characters were studied with SEM and light microscopy. A general leaf anatomical description of Arytera is provided, together with data for the individual species. Several methodological issues pertaining to the practice of cladistic analysis are treated in some detail. These are the coding of polymorphic species, and the choice among multiple equally parsimonious cladograms. Polymorphic species theoretically should be assigned the locally plesiomorphic character state; because this state is not known in advance, they should be coded as polymorphic when the analysis is carried out with the computer programs PAUP and CAFCA, and as unknown when using Hennig86. In the latter case the resulting cladograms should be checked to ensure that none of the resulting cladograms becomes longer due to species lacking the locally plesiomorphic state for one or more of the characters for which they are polymorphic. The choice among multiple equally parsimonious cladograms should be based on differential weighting of the characters on the basis of the number of homoplasious (extra) steps they require. Characters with little homoplasy are to be given more weight than characters that display much homoplasy. One of the methods to realise this is to prefer cladograms which have a higher average unit retention index. A historical biogeographic analysis is provided for the region in which Arytera occurs, i.e. Australia, Malesia, and the West Pacific. Different methods of analysis (Brooks Parsimony Analysis, Component Compatibility Analysis, Component Analysis sensu Page) are carried out and compared. A new method is presented for coding so-called ‘missing areas’ under Component Compatibility Analysis, which makes use only of the information provided by the taxa that are present in such areas. Attention is also paid to the interpretation of character state changes on areagrams, leading to the conclusion that the nature of chance events (dispersal, extinction, etc.) usually cannot be inferred from the optimisation on the areagram alone. Next to Arytera and Mischarytera, six other genera of Sapindaceae were used. Several patterns are apparent in the results. Firstly, New Caledonia, the Loyalty Islands, and Lord Howe Island show a vicariant pattern with respect to the Australian continent, whereas the distributions of taxa on the remaining islands in the West Pacific probably are due to dispersal. Secondly, a dichotomy is apparent between the areas on the Australian craton and areas which geologists assume to have been accreted onto its northern edge. Thirdly, West Malesia was probably reached by some of these genera from the East in a number of dispersal events. Finally, a recent exchange of floristic elements has taken place between Northeast Australia and South and Southeast New Guinea, probably during Pleistocene periods of lowered sea levels. 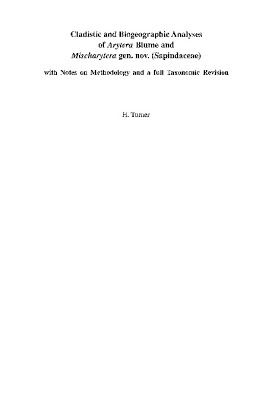