The wild species of Oryza in the Malay Archipelago

According to general opinion the spikelets of Oryza consist, reckoned from their base upwards, of 2 sterile glumes, called hereafter I and II, one fertile glume (valvula inferior; lemma), called hereafter III, and the palea valvula superior) to this glume, called hereafter p3. The spikelets are placed singly on the very short ultimate branchlets, called hereafter pedicels, of a more or less strongly ramose panicle; the tips of the pedicels are broadened into a shallow infra-spicular cup, either distinctly 2-lobed or not; from the bottom of the cup arises a minute knob, on which the very distinct basal callus of the spikelet is jointed. When ripe, the spikelets of the wild species fall off as a whole, disarticulating at the joint (in dried specimens often long before maturity; hence in herbarium-specimens they are frequently lacking). In many cultivated forms they remain firmly attached to their pedicels, a property of very high economic value. The spikelets are strongly laterally compressed. I and II are either 1-nerved or nerveless; as a rule they are many times shorter than the spikelet, sometimes even very minute. Only in O. Ridleyi they are comparatively well-developed, reaching about half the length of the spikelet, but very narrow. III is very rigid, usually conspicuously granulate, boatshaped, keeled, either awned or not, 5-nerved, with a strong midrib; it has the ultimate lateral nerves along the margins. P3 is likewise boatshaped, shortly cuspidate or not, with a narrow, rather rounded, less often faintly keeled back, 3-nerved; it is about as long as III, awn disregarded, and has the same rigid granulate structure, excepted the narrowly incurved thinly membranaceous smooth marginal parts (hidden by III). It might be taken for a fertile glume, but this view is inadmissible because of the averted position of the lodicules. It has a rather thin mid-nerve and strong lateral nerves, separating the rigid central part from the membranaceous borders. The well-developed lodicules are glabrous; the six stamens are free; there are 2 free shortish styles with large plumose white or violet stigmas which, during anthesis, stick out from the sides of the spikelet in or below its middle. The ripe fruit is oblong or lanceolate, usually angular; it is free from glume and palea but remains firmly incarcerated between them. 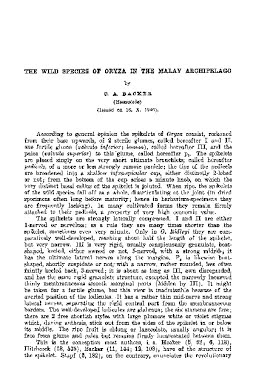