This publication presents a systematic study of the Hypopterygiaceae Mitt. s.l., a small family of pleurocarpous mosses. It includes a taxonomic revision and phylogenetic analyses to clarify the circumscription of the family and the mutual relationships of its genera and species. The Hypopterygiaceae have a mainly Gondwanan distribution and occur in humid forests of (warm-)temperate to tropical areas of the world. They are characterised by having partly or entirely complanate foliate stems and branches, whereby the leaves are arranged in two rows of asymmetrical, lateral leaves and a single, ventral row of smaller, symmetrical amphigastria. Seven genera are recognised. The c. 160 validly published species and intraspecific taxa are reduced to 21 species. The family shows its greatest diversity in Indo Malaysia (11 species) and Australasia (9 species). Africa and the New World are poor in species with, respectively, 3 and 5 representatives. In the past, the Hypopterygiaceae were regarded as a monophyletic family, but during the last twenty years this status has frequently been discussed. Several authors suggested the Hypopterygiaceae to be polyphyletic, while others still regarded the family as monophyletic. However, a series of phylogenetic analyses performed in this study — based on 57 morphological characters and, initially, 34 species, including the Hypopterygiaceae and representatives of possibly related families — supports the monophyletic status of the Hypopterygiaceae. Based on the outcomes of the analyses, the genus Cyathophorella (Broth.) M. Fleisch. is united with Cyathophorum P. Beauv., which results in the well-supported, monophyletic genus Cyathophorum with 7 species. The genus is nested in a monophyletic Dendrocyathophorum Lopidium Cyathophorum clade. Lopidium Hook. f. & Wilson is a well-supported monophyletic genus of two species. Dendrocyathophorum Dixon is a monotypic genus that is maintained as a separate genus. One of the most characteristic features of Dendrocyathophorum, the central cavity in its axes, is a plesiomorphic condition and a synapomorphy of the DENDROCYATHOPHORUM L0PIDIUM C YATHOPHORUM CLADE Hypopterygium Brid. is a paraphyletic genus of 7 species, which has a basal position to the Dendrocyathophorum-Lopidium-Cyathophorum clade. The monotypic genera Catharomnion Hook. f. & Wilson and Canalohypopterygium W. Frey & Schaepe form a monophyletic clade with a basal position to the Hypopterygium grade. Catharomnion and Canalohypopterygium share the — for mosses unique — rudimentary branches and associated cavity system, but are maintained as separate genera, because of distinct morphological differences, in particular in sporophytic characters. Dendrohypopterygium is a newly described paraphyletic genus of two species, which has a basal position to the Hypopterygiaceae in the obtained phylogenetic trees. The distribution of extant Hypopterygiaceae is probably the result of a combination of dispersal and continental drift acting as vicariance and speciation events. Dispersal of Hypopterygiaceae occurs by means of detached branch fragments, detached leaves, gemmae, and spores. Vegetative propagulae and a portion of the spores mainly contribute to local dispersal and the maintenance and growth of local populations. Dispersal by spores is most common over longer distances. However, the survival rate of spores of Hypopterygiaceae under conditions occurring during long-distance transport in air streams is low. Effective long-range dispersal is probably rare in Hypopterygiaceae, and may have occurred only few times in the history of the family (e.g. Hypopterygium sandwicense on the Hawaiian Islands). Endemism in New Zealand, Australia, and South America suggests that the origin of the Hypopterygiaceae is situated in East Gondwanaland. The presumably terrestrial, dendroid ancestral species were probably distributed in active mountain ranges on the margin of the continent and faced cool temperate conditions and occupied humid, terrestrial habitats at low altitude. Descendants of the cool-temperate ancestor(s) probably moved to higher altitudes due to climatic changes in the course of the Cretaceous. Speciation was induced as a result of fragmentation of the original distribution area in combination with a change of ecological conditions towards a higher humidity and precipitation. Descendants of the terrestrial ancestral species became epiphytic and epilithic. The rise and radiation of angiosperms have presumably favoured the appearance of epiphytes. The Hypopterygiaceae are probably at least 84 million years old, but presumably much older. The existence of most extant species and their present distribution can be explained by northwards rafting on drifting fragments of East Gondwanaland during the Cretaceous or Cenozoic period in combination with mainly short range dispersal events. It seems that Hypopterygiaceae experienced low evolution rates, but part of the family faced probably a Cretaceous radiation event eventually resulting in the appearance of pinnate or simple epiphytic species. Intraspecific variation that is found in some Hypopterygium-species (H. tamarisci, H. flavolimbatum, and H. didictyon) is perhaps of Late Cenozoic origin, and may represent an early stage of a second radiation event due to the climatic changes in the Late Cenozoic. 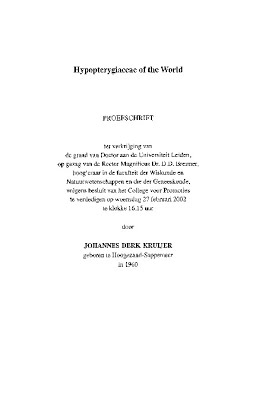