On the 13th of October 1940 I found in the vicinity of a wool- and skinwork in Tilburg (The Netherlands, prov. N. Brabant) a sterile grasstuft, striking me by its peculiar habit. I transplanted it into my garden in Dordrecht and there it was flowering for the first time in June 1941, and in July it was collected to be dried. On the 4th of July 1941 I gathered one more fructifying specimen at the same locality in Tilburg. Doubtless the plant was a Deschampsia and my provisory identification was D. media R. et Sch.. Sending the material with this name to Dr P. Jansen in Amsterdam I got his reply: ”Certainly not D. media. It is a species, unknown to me or, more probably, a variety of D. flexuosa“. This conclusion, however, seemed unacceptable to me. The habit of the sterile as well as the fertile plant differs strongly from that of D. flexuosa. The tuft is denser and harder, with thicker and shorter leaves. The panicle is longer, wider and more diffuse, the branchlets less flexuous, the culms are relatively short, as long as the panicle or at most 1½—2 times the length of the panicle (in D. flexuosa 4—5 times). The characteristics of the flower are decisive. The lower glume is 5 mm long, the upper one 6 mm, both of them overtop the lemma and palea of the enclosed flower (in D. flexuosa the glumes are little different in length and equaling or overtopped by the flowers). The stipe of the upper flower, remaining attached to the lower one, when the spikelet falls asunder, is densily pencilshapedly hirsute and 1.5 mm long (in D. flexuosa 0.6—0.8 mm). The upper flower bears a similar stipe of a fully rudimental third flower, in other words: the rachilla is produced behind the upper palea as a hairy bristle. These properties sooner recall D. setacea than D. flexuosa, but the anthers are very small, 0.3—0.5 mm long, on much longer filaments (D. setacea has anthers, 1.5 mm long, filaments 0.5 mm, D. flexuosa: anthers 1.8 mm, filaments very short). All this: the habit, the pale green spikelets without any touch of purple, brown or blue, and the small anthers on long filaments justifies a specific differentiation of the Tilburgian wooladventive. I propose to name it, in honour of Dr J. Th. Henrard, whom I owe so much in the field of adventives in general and of Gramineae in particular: Deschampsia Henrardii nov. spec. 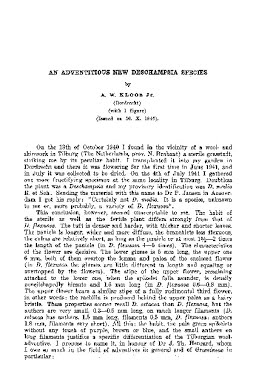