Dr. C. A. BACKER and Dr. O. POSTHUMUS, Varenflora voor Java. Overzicht deiop Java voorkomende varens en varenachtigen, hare verspreiding, oekologie en toepassingen. Uitgave van (Fern flora for Java. Conspectus of the ferns and fern allies occurring in Java, their distribution, ecology and use. Issued by) ’s Lands Plantentuin, Buitenzorg, June 1939. I—XLVII, 1—370, 1 Plate, 1 map and 81 text figures. — ƒ 7.50. The users both at home and abroad of Dr. BACKER’s florae have always regretted that, however carefully these books have been prepared, most of them were imperfect in one way or another. They were either restricted to certain vegetations (weedflorae for tea and sugar-cane) or did not cover all groups of vascular plants; the ”Flora van Batavia“ (1907), the ”Schoolflora voor Java“ (1911) contain only the Dicotyledoneae-Dialypetalae, the ”Handboek voor de flora van Java“ (1928) contains scattered families of the Ferns and Fern Allies, Gymnosperms and many Monocotyledons. This phenomenon is probably due to the fact that BACKER is a most accurate and painstaking worker, who is inclined to refrain from publication unless he is reasonably sure to be correct; and we all know how difficult it is to reach a mental state of this description. However, BACKER has for some years been engaged in preparing with untiring and admirable energy, a new and complete ”Schoolflora voor Java“, the manuscript of which is rapidly growing to maturity. When the Pteridophytes were completed as far as the regions up to 3300’ were concerned, Dr. POSTHUMUS suggested a collaboration in order to make a complete flora of vascular cryptogams. This collaboration of our keenest connoisseur of the Java flora and our best pteridologist resulted in the book, which we have the pleasure to announce and recommend here. Together with the new. ”Schoolflora“ to which we may be looking forward soon, it will form the first reliable flora of the vascular plants of Java. Although the Dutch language is probably less unapproachable than the Russian one, with which Soviet botanists try to convince the world that everybody should know Russian (or that it is not necessary that other peoples should know Russian botany?), it is, I think, to be regretted that our mother tongue has been chosen for a book which many foreign botanists, notably in British Malaya and British Borneo, may desire to use. This is the more so, as the book does not only contain keys to the determination and descriptions of the 15 families, 104 genera and 515 species, but also interesting chapters on the distribution (with map), the ecology, the sociology and the use of the plants described. Also the introductory paragraphs (pp. XIII—XXX) contain many valuable and interesting notes on the morphology; the wording of these chapters is probably not easy for those who are only little familiar with our language, as BACKER has a certain predilection for a literary style. 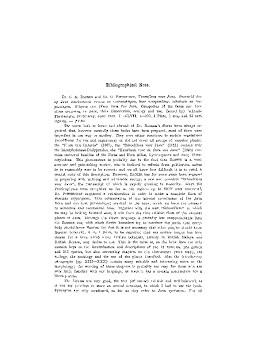