This flora covers part of the Great Indian or Thar Desert, viz. the Districts of Jodhpur, Barmer, and Jaisalmer in Rajasthan State, an area of some 25,000 sq. km. It is an inhospitable region mainly of sand dunes at about 100 m above sea level. The indigenous flora of this region includes 619 species of Seedplants (78 families, 315 genera). The flora proper is preceded by a short introduction mainly on the climate, soil, and vegetation. The flora gives keys to the families, genera, and species. The names of the families are given without any citation; of the genera only the nomenclaturally relevant literature has been cited. The citation of the species is more complete and includes the nomenclaturally relevant and the main Indian literature and synonyms, mostly rather lengthy descriptions, field notes, periods of flowering and fruiting, local names, specimens studied, the distribution world-wide and in India, uses if any, and sometimes notes mainly on nomenclature. At a first glance, this flora makes a good impression. In many floras the key to the families is the weakest point. I have tried it with several tests taken at random and did not meet any difficulties. The same seems to hold true for the keys to the genera of two of the larger families, the Leguminosae with 39 genera and the Compositae with 28 genera. As to the latter key the last lead, 32b, leads to nothing, probably rightly so, and can be dropped. Furthermore, Lactuca keys out under 1 a, flowers yellowish, which agrees with most species. However, the only species in this flora, L. runcinata, is described as having the flowers pinkish white and gets stuck under 1 b accordingly. The key to the 55 genera of the largest family, the Grasses, will give lots of trouble. Lead 1 b is simply lacking; couplet 21 (17 in the first edition, with the same problems) comes from nowhere which means that 11 genera are inaccessible; the first of the three leads under couplet 28 only repeats lead 27 b and has to be dropped; couplet 31 seems to come from nowhere and encompasses three leads which are not clearly contrasting and the first of which apparently leads to nowhere – actually, lead 31 a is the lacking lead 1 b and leads to 32 and 39; couplet 33 has three leads of which only the 2nd and 3rd one are contrasting; finally, lead 55b leads to nowhere. 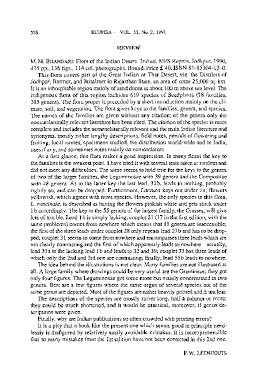