In the introduction a brief historical review is given of the more important earlier treatment of the genus. In chapter 2, covering morphological observations, I have also inserted remarks on the systematic value of certain features. The axillary (and in sect. Neossia, nodal) hairs have often been interpreted as representing stipules. I have tried to advance arguments in order to show that their stipular homology is most unlikely. It is confirmed that there is no essential difference between the morphological structure of the inflorescence and that of the vegetative portion of the plant. There is no unanimity of opinion about the interpretation of the 2-whorled perianth; the outer series is often accepted to be of a bracteal nature. Von Poellnitz refers to the outer whorl as ‘Involukralblätter’, Legrand names them ‘pseudosepalos’. However, the fact that in subg. Portulaca, with flowers in capituli, the whorls are inserted at the same height on the receptacle which is adnate to the basal part of the ovary, and the fact that below the receptacle there are generally two true bracts, make it almost certain that such assemblage is a contracted triad, with one developed flower and 2 ‘bracteoles’. This cymose nature is further sustained by the species of subg. Portulacella in which true cymes occur. In chapter 3 it is argued that the present wide distribution of several species, e.g. P. pilosa, P. quadrifida, and P. oleracea, is mainly due to man, by his transport and cultivation. Such species behave often as ruderals and adventives beyond their original country. Of some of these the genuine native country is for these reasons even unknown or very uncertain, e.g. that of the diploid P. oleracea; its cultivated strain is hexaploid but this is also found as a ruderal and adventive. P. pilosa s. l. may be originally of Australian origin, judging from the geographical area of its nearest allies and the very large degree of variability it exhibits in Australia. Self-pollination is obviously the rule in Portulaca as well as in Talinum, another genus of the same family; this may even be prevalent in the entire family. This implies, and explains, a profuse occurrence of more or less pure lines (local populations or races) in nature which keep constant in details (e.g. the sculpture of the testa). For this reason, not a few of these have been distinguished as (micro) species by former authors. Some of these characters are more conspicuous in the field than in the herbarium. For example, I have grown two of such lines of Talinum paniculatum which throughout their range differ (in living state) constantly in the following three minor characters: testa minutely tubercled or smooth, panicles narrowed or not, fruits red or yellowish. Such characters would seem to be determined merely by a few genes, and do not or hardly deserve systematical recognition as formal taxa. They are just on the border of herbarium taxonomy, and can only be solved, as to their genetical basis, by experimental taxonomie work. Only when more and clearer characters occur combined in complexes I have accepted these in a formal taxonomie hierarchy, e.g. in P. pilosa. On the whole I have felt induced to be rather conservative in accepting good species, but many are reduced to synonymy or to infraspecific rank. In chapter 4 the subdivision of the genus is discussed. It appeared that those of von Poellnitz (1934) and (to a lesser degree) Legrand (1953, 1958) are unsatisfactory. I have framed a new, more simplified, subdivision reflecting my ideas. Some taxa could not well be understood and have been referred to under the genus. From the morphology and taxonomy it is concluded that the ancestral lineage of the genus is in Australia, which fits in with the general geographical configuration of the family which is predominantly a southern hemisphere group. Chapter 5 contains some notes on typification, which has been effected as much as possible, mainly by lectotypification. Unfortunately, some types proved to be untraceable. The area covered in this account ranges from India eastwards through Indo-Australia as far as the Central Pacific. I have refrained from citing specimens examined. A list of these will be published separately as an Identification List. In the systematic treatment full synonymy, descriptions, and keys are given to taxa, both species and infraspecific entities. Not all names could be placed, either by absence of types or lack of material. These are listed at the end; tentative suggestions are given to their proper identity. The number of species distinguished in Portulaca has varied enormously. Linnaeus had only 2 species, P. oleracea and P. pilosa; Index Kewensis lists c. 600 names. In this century von Poellnitz has described in his papers precursory to his monograph described many dozens of new species. For a large part he withdrew these again and sunk them into synonymy in his monograph of 1934, in which he accepted in all 104 species. Subsequently c. 30 new species were added by various authors. Legrand (1962) in his revision of the American species reduced quite a number of von Poellnitz’s species, still maintaining 62 species for the New World. He distinguished, however, a large number of varieties reflecting the variability of these species. More than 50 of his species belong to subsect. Stellulato-tuberculatae, mainly comprising the P. pilosa complex. In my opinion this complex consists of only one compound species, in which I have distinguished 8 subspecies for Indo-Australia. In America P. pilosa is obviously still more variable. I estimate that the entire genus consists of not more than 15 good species, mainly in the Old World, viz. 4—5 in subg. Portulacella, 3(—5) in subg. Portulaca sect. Neossia, , 2(—7) in sect. Portulaca subsect. Portulaca, and possibly only 2 in sect. Portulaca subsect. Stellulato-tuberculatae. The two Linnean species, P. pilosa and P. oleracea, possess, in that sequence, the greatest variability. The generic name Meridiana Schrank is reduced to Trianthema L. 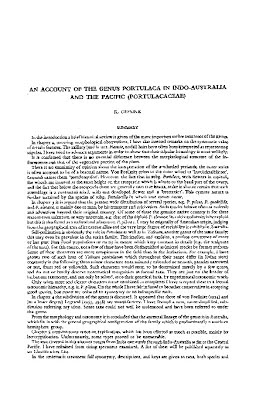