A taxonomic revision of Harpullia (Sapindaceae)

The present taxonomic revision of Harpullia was started by the second author as the main part of her work for a M. Sc. in biology at Leiden University. She concentrated on a revision of the species occurring in New Guinea, paid only a more superficial attention to the rest of the genus. The first author supervised her work, completed it, and worked it up for publication. It is hoped that this taxonomic revision will be followed by two more papers, one on the pollen-morphology by Dr. J. Muller, secondly one on the systematics of the genus by the first author of the present paper. The system that will probably emanate from the last named paper is already used in the present one and, accordingly, will be sketched here. The genus is, as with Radlkofer (1933-1934), divided into two subgenera, namely a supposedly more primitive one, Otonychium, with only two species, H. pendula (1) and H. arborea (2), and the other one, Harpullia, with the further 24 species. Contrary to Radlkofer, however, we refrained from a further subdivision into sections, but grouped the species of the latter subgenus in a more informal way. The first rather loose group of supposedly relatively primitive species encompasses H. austro-caledonica (3), H. giganteacapsula (4), H. longipetala (5), and H. species nova (26). Next comes a mainly Australian group of species characterized by winged petioles and leaf rachises, viz. H. frutescens (6), H. alata (7), H. rhyticarpa (8), and probably the New Guinea H. rhachiptera (9). The likewise Australian species H. hillii (10) seems to take a position in between some groups, as explained in the note under that species. Included in the third group are H. cupanioides (11), H. vaga (12), H. crustacea (13), H. camptoneura (14), and H. hirsuta (15). To the fourth group belong three New Guinea species characterized by deeply lobed fruits, viz. H. leptococca (16), H. carrii (17), and H. oococca (18). The fifth and last group, considered to be the most derived one, is characterized by rami- or cauliflory. This group encompasses 6 or 7 mutually closely allied species, viz. H. solomonensis (19), H. ramiflora (20), H. myrmecophila (21), H. cauliflora (22), H. petiolaris (23), H. largifolia (24), and probably H. peekeliana (25). 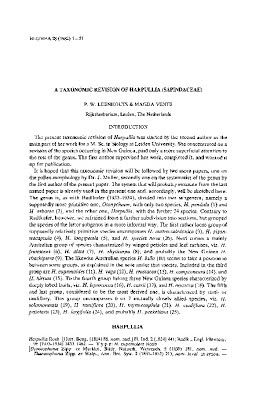