Natural and semi-natural vegetation in Japan

Studies on the composition of the forests and other vegetation of Japan were initiated by J. Tanaka (1887) in the Meiji Era. According to his introduction his field survey started in 1879 and resulted into a classification of vegetation zones (forest zones), mainly of the lowland, based on physiognomy and dominant species. In later years some other major proposals of the vegetation zonation were made. Honda (1900) distinguished also altitudinal zones, based on his survey on dominance, and provided it with the first vegetation map. Nakano (1942—1943) stressed the physiognomy combined with species composition, sociology, and succession but did not produce a map. Kira (1949) described the forest zones of Japan stressing the climax concept and correlating ecology mostly with temperature; he added a map. Miyawaki (1967) wrote a large book (provided with a map) on the vegetation of Japan in which the climax concept played an important role, as it did in the study by Suzuki (1966a) who partly tried to integrate actual vegetation with climax types, paying great attention to the sociological aspect; he gave also a coloured map. Miyoshi (1903) introduced in Japan the study of plant communities and some years later (1907) the study of ecology, and these two disciplines have been pursued by the research schools of his pupils, Nakano at Tokyo University, Yoshii at Tohoku University, etc. A large number of papers have resulted in these two fields of vegetation study, mainly published in the Botanical Magazine, Tokyo (Botanical Society of Japan, 1887—), Japanese Journal of Botany (Japan Science Council, 1922—), Journal of Japanese Botany (Tsumura Laboratory, 1926—), Acta Phytotaxonomica et Geobotanica (Kyoto University, 1932—), Ecological Review (Tohoku University, 1935—), Bulletin of the Japanese Society of Plant Ecology (Tokyo University, 1941—1943), Physiology and Ecology (Physiol. & Ecol. Publish. Ass., Kyoto, 1947—), Hikobia (Hiroshima University, 1950—), Bulletin of the Society of Plant Ecology (Tohoku University, 1951—1954), Hokuriku Journal of Botany or Journal of Geobotany (Kanazawa University, 1952—), Japanese Journal of Ecology (Ecological Society of Japan, 1954—), etc. Besides the papers in these journals, science reports of universities have contributed to the development of ecological studies in Japan. A historic review of plant ecology in Japan and basic concepts, principles, and methodologies of ecology was given by Numata (1953, revised edition 1967) and a very brief bibliography of the literature concerned was published in ‘Ecology’ (Numata, 1958). 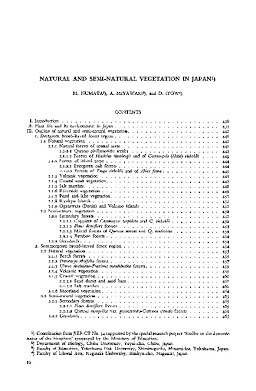