Notes on the genus Digitaria, with descriptions of new species

Some years ago I had the opportunity to study more extensively a very interesting group of grasses, belonging to what is now accepted as a distinct genus, the genus Digitaria, formerly belonging as a subgenus to the genus Panicum. As to living plants of this group I was familiar with two european species, also found in the Netherlands. They are treated in the Synopsis of Ascherson nd Gräbner and once more in the second edition of this work. Under Panicum they bear the names P. lineare KROCKER and P. sanguinale L. The first species belongs to HACKEL’S „Ternata”, the name is invalid on account of the Panicum lineare of LINNAEUS, a species described from India, we know that KROCKER’s plant does not occur in India and it is therefore necessary to look for the correct name of the species. A more detailed study of the synonyms and their priority proves that the valid name is that of SCHREBER, published by SCHWEIGGER as Panicum Ischaemum. ASCHERSON gave as the date of publication for this name, the year 1811, if this was indeed correct, our species had to bear the name of Digitaria humifusa PERSOON, published in the year 1805, the citation of the year 1811 by ASCHERSON is however wrong as SCHREBER’S name was published in the year 1804. This is evident from SCHRADER’S work, where is published the same species as Syntherisma glabrum, this was done in the year 1806 and as a synonym is given the Panicum Ischaemum SCHREBER, given in SCHWEIGGER’s Flora. It was MUHLENBERG, who, in the year 1817 took up SCHREBER’S name under Digitaria, he published the species as Digitaria Ischaemum with SCHREBER as author. The name of our species, which also occurs in America, is thus Digitaria Ischaemum (SCHREB.) SCHREB. ap. MUHLENBERG. It is curious that such a common species escaped to the attention of LINNAEUS. The species is easy to recognize and not very variable. Among the few varieties the most characteristic one is the var. prostrata (ASCH. et GR.) HENR. nov. comb., with long runners rooting at the nodes; the variety hirta (JUNGE) HENR. is not so important, the lower sheaths are not always quite glabrous and a more or less distinct pubescence is not rarely observed. Our second species described as Panicum sanguinale becomes under Digitaria, the D. sanguinalis (L.) SCOPOLI. Botanists who have studied the type in the herbarium of LINNAEUS, indicate that this type represents the european plant treated under this name in our manuals. If we study only the literature of this species, we find that it is common all over the world, there is scarcely any flora where the species is not mentioned, with exception of the cold regions. All the tropical floras give the species as an indian plant and we find it thus in HOOKER’S Flora of British India and in the works of the recent Dutch botanists. Many years ago when I saw for the first time the so-called Panicum sanguinale, I found already that the Javanese plants did not agree with our european P. sanguinale and being familiar with the latter in the living state, I was not willing to accept the indian specimens as belonging to our D. sanguinalis. Since that time I could study a very extensive material of D. sanguinalis from localities all over the world and my opinion on the tropical plants was not changed. That we have two distinct species before us was already pointed out by the american botanist NASH, who accepted the plant from the southern regions of N. America as a distinct species under the name of Syntherisma marginata NASH, based upon LINK’S Digitaria marginata from the year 1821. Having studied LINK’S type in the Berlin Herbarium, I recognized it as being indeed the indian D. sanguinalis. LINK gave the locality as Brazil. It is further noteworthy that the very accurate Dutch botanist BUSE did not mention the Digitaria sanguinalis in his enumeration of JUNGHUHN’S indian grasses. Since NASH accepted the two species as different, modern american agrostologists neglected them in their works and accepted only a Digitaria sanguinalis. In the beautiful book of W. A. SILVEUS on the Texas grasses, only the Digitaria sanguinalis is taken up, although the typical D. marginata occurs there. The plate on p. 489 in SILVEUS’s book and also his drawings represent the D. marginata, it may be that the true D. sanguinalis, although represented in N. America too, is not found in Texas. 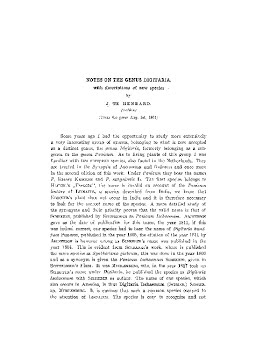