The elevation effect is defined as the phenomenon that mountain plants occur only on mountains which attain a certain minimum altitude peculiar to the species, but that they generally descend below this critical altitude on the higher mountains. It can also be expressed in figures as the difference between the minimum altitude of the peaks and that of the lowest known locality. If for example a species occurs from 1500 m upwards, but only on mountains whose highest peak exceeds 2200 m altitude, the effect amounts to 2200—1500 = 700 m. First observed for one plant on the volcanoes of Java by Backer & van Slooten (1924), it was assumed applicable to all Malesian mountain plants by van Steenis (1934). It was further elucidated by him (1961) by a number of computed examples; he abandoned the earlier idea that it had something to do with the ‘Massenerhebungseffekt’ (mountain mass-elevation effect) and gave an explanation for the elevation effect by assuming that each mountain plant occupies a zone of permanent establishment, on both sides bordered by a zone of temporary localities, the critical altitude being the lower contour of the permanent establishment (fig. 1). In other words, mountain plants can only descend to their lowest localities on peaks whose summits fall at least partly in the zone of permanent establishment, ensuring a constant upper source for descending diaspores. If the explanation is correct, the elevation effect must be universally valid for all mountain plants, and not only for those on volcanoes. Encouraged by an observation of a New Zealand Ranunculus by Fischer (1965), which was said to occur only on mountains with a minimum peak altitude, the author has tested the alpine flora of Switzerland on the occurrence of the elevation effect. For this purpose he has drawn a map of Switzerland at the 2000 m contour by which it became divided into 121 ‘mountain islands’ exceeding that altitude (list p. 278, Karte 1). Then 23 species of mountain plants were selected responding to the conditions that they occur largely above 2000 m, that they are fairly common, that they are not expressly bound to very narrow ecological conditions, and finally that they are homogeneous and do not show infraspecific differentiation (see list on p. 280). The proper scoring was done in II herbaria in Switzerland, public and private, from many thousands of sheets of which the label carried an altitudinal notation, in a few cases supplemented by data from local monographs. The complete survey of altitudinal data, with their frequencies for each species has been compiled in table 1; for four species these data have been figured in graphs illustrating more clearly the tailing off of frequencies at both higher and lower altitudes. For each species a detailed account is given of the number of specimens examined, their distribution over the various ‘mountain islands’, data found in literature, lowest ‘mountain island’ on which the species is found, a list of the lower localities, and finally a discussion of the results. It appears that each of the 23 species examined shows the elevation effect and that there is no reason to doubt its general validity, even for arimals. All occur only on mountains with a minimum altitude and all descend on the ‘mountain islands’ to a distinctly lower altitude. The elevation effect in metres for each species, as computed by the difference between the height of the lowest ‘mountain island’ on which it occurs and the lowest locality known, is reproduced in table 2 on p. 312. The explanation adhered to is that the scarce lowest localities are, for their maintenance, entirely dependent on the continuous supply of diaspores from the permanent, higher situated populations. On the higher mountains there is a continuous supply from this source, but this is absent on the mountains not reaching above the minimum altitude. The elevation effect is influenced in detail by various ecological factors among which the most important are: temperature, soil, physiognomy of the vegetation, autecology of the species, dispersal biology, and man. These factors have all been discussed separately. It appears that the lowest localities always occur on sites which deviate in some way or other very locally from the surrounding biotope, by lower temperature, more open vegetation, etc. Such ‘enclaves’ show characteristics of higher situated zones; they are for example streamborders, glaciers, deep ravines, waterfalls, etc. 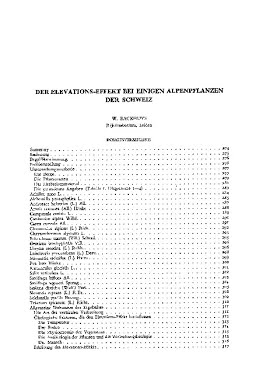