Up to the present Meliosma was subdivided into two sections, Simplices and Pinnatae. These taxa are shown to be artificial, and a new, less simple but more natural infrageneric subdivision is made, viz. into the subgenera Kingsboroughia and Meliosma, subdivided into the sections Hendersonia and Kingsboroughia, and Meliosma and Lorenzanea respectively. The old sections Simplices and Pinnatae have been reduced to subsections of sect. Meliosma. This new system is primarily based upon endocarp characters which were as yet unknown; it has appeared that the morphology of the endocarp shows very important features. In subg. Kingsboroughia the vascular bundle connecting pedicel and seed is situated outside the endocarp wall, which is considered the most primitive situation, whereas in subg. Meliosma it is enclosed within the endocarp. The endocarp types of the four sections, in the sequence mentioned above, show an increasing degree of specialization, i.e. an increasing degree of enclosure of the vascular bundle by the endocarp wall; the most primitive type is found in the Malesian sect. Hendersonia, and the most specialized one in the American sect. Lorenzanea. The latter does not occur outside the New World, whereas the other three sections are SE. Asian, sect. Kitigsboroughia and sect. Meliosma subsect. Simplices centering in SW. Central China, N. Upper Burma and Tonkin, and sect. Hendersonia and sect. Meliosma subsect. Pinnatae centering in N. Sumatra, Malaya, and N. Borneo; these areas are shown to be probable, primary centres of origin of the species of these groups. Subg. Kingsboroughia and sect. Meliosma have thus bicentric areas, which are considered homologous, hence suggesting a similar distributional history of the taxa involved. Similar bicentric areas are also found in some other, unrelated genera, and may be not uncommon. Subg. Meliosma is a common, widespread, diversified taxon, in contrast to subg. Kingsboroughia which has only three uniform species covering small and disjunct areas. It is demonstrated that subg. Kingsboroughia is a relict group, which was much more widespread in former geologic periods than it is at present. This is supported among other things by the transpacific disjunct distribution of M. alba which at present only occurs in SW. Central China and in S. Mexico (formerly known as two separate species which were never compared). The history of the distribution of Meliosma during the Tertiary period can be partly reconstructed with the help of fossil records of this genus, more than 40 of which have been evaluated, mostly on the basis of paleobotanical literature. It appears that most of these records, including endocarps and leaf-imprints, are reliable, especially those of endocarps. With the help of these it can be established that the four sections and the two subsections of Meliosma were already recognizable as early as the Lower Eocene. From that time on their distributional history can be more or less traced up to the present. It is very probable that during the warm Eocene sect. Meliosma entered America via Beringia (the reverse possibly holds for sect. Lorenzanea), whereas it is certain that sect. Kingsboroughia did so at a later phase of the Tertiary, when the climate was cooler and a forest of warm-temperate ecology covered a wide zone in the northern hemisphere. The Pleistocene glaciations destroyed most of this vegetation and consequently the area of sect. Kingsboroughia was reduced to a few small relict stations, of which the localities of the above-mentioned disjunct M. alba are the most remarkable ones. The taxonomic revision proper deals only with the SE. Asian sections of Meliosma; the American sect. Lorenzanea has been excluded. Up to the present the number of Asian species of Meliosma was estimated to be nearly 100, the number of names even being twice as much. Of these species only 15 are recognized here, and no new species have been described. A number of these are widely distributed, complex species, which can be subdivided into several subspecies. It appears that in all species these subspecies are isolated from each other, either geographically, or ecologically (by altitude or habitat). One special case of ecological isolation has been found, viz. between two different-sized subspecies flowering respectively in the undergrowth and in the upper tree storey of lowland tropical rain forest. Finally, evidence has been found that Meliosma is a self-pollinator, which would favour the origin and perpetuation of local races, and hence would account for the richness of forms in Meliosma species. 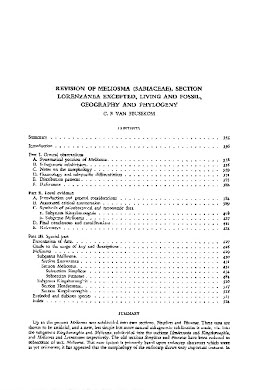