Identification of some Malaysian grasses

When BUSE gave an enumeration of the grasses collected by JUNGHUHN in Java and Sumatra, he mentioned under Paspalum a species, described by RETZIUS in the year 1781 as Paspalum hirsutum. BUSE identified a grass from Sumatra as being the species of RETZIUS, on account of the description, having certainly not studied the authentic specimen, which was at that time not easy to consult. It may be that even the work of RETZIUS was not at his disposal, it is probable that he studied only the description, given afterwards in LAMARCK’S Encyclopédie. RETZIUS described his species from China, where it was collected by BLADH. Although the description of RETZIUS agrees fairly well with BUSE’S plant, we are in modern times not so satisfied with such an identification, because it is a priori not sure at all that the Chinese species is identic with a grass from the high plateau of Sumatra, the more because since the description by RETZIUS and the identification by BUSE, such a Paspalum was never found in the wide area between China and Sumatra. I therefore carefully studied the type of RETZIUS at the herbarium of Lund (Sweden), which was kindly forwarded for study from the director at Lund and I compared it with BUSE’S type, preserved at the Rijksherbarium. The latter is in a very good condition. Already at first sight the two types agree very much especially in the vegetative parts, the number of racemes, their length and general form In the genus Paspalum, a very large one, much weight is given by agrostologists to the form and outline of the spikelets and I will therefore give my opinion on the type of RETZIUS first. The plant consists of an upper part of the culm with 3 very hirsute leaves and 2 distant racemes. The spikelets have hairy pedicels, the short hairs are sparingly mixed with long ones. The form of the spikelets is obovate-oblong; they are obtuse at the summit and rounded. The first glume (mostly rudimentary in the genus) is wanting the second one, which is very convex, is slightly shorter than the spikelet, minutely punctulate and provided with 5 very strong nerves, a midnerve and two marginal ones, the latter anastomosing upwards and running into the midnerve at the top, which is thickened where the nerves meet. The sterile lemma or third glume is flat and as long as the spikelet; it has 3 strong nerves, a midnerve and 2 submarginal ones, anastomosing at the summit; the true margins are membranaceous and distinctly hairy at the middle, the hairs more or less flexuous or curved. Besides these 3 nerves there are 2 more nerves at a rather broad distance from the midnerve; these two nerves are faint and distinct only at the base of the glume and evanescent upwards, being undulate and giving that part of the glume a scrobiculate, transversely wrinkled appearance. The fruit (fertile lemma) is dark brown and exposed by the shortness of the covering glume. From all these characters it is evident that RETZIUS’S plant belongs to a group of species in the genus Paspalum called by Mrs. AGNES CHASE the „plicatula”. Representative species of this group are the well-known New World Paspalum plicatulum Michx. and the variable Old World species Paspalum scrobiculatum L.. The characters of the true Paspalum hirsutum are given on my plate, which is an exact copy of the type specimen, the spikelets being magnified 10 times. Returning to BUSE’S plant from Sumatra, I indicate here the different characters of the spikelets. Their form and outline is different, they are not only a little longer but more elliptic, not rounded at the summit but distinctly obtusely apiculate; the convex glume is 3-nerved only, the marginal nerves not doubled, the glume is longer than the fertile lemma, obtecting it entirely and protruding above it; the flat sterile lemma is more narrowed upwards too with 3 very distinct nerves and 2 interjecting faint ones, the surface is wrinkled as in the American Paspalum plicatulum and the body of the glume is perfectly glabrous. Comparing types and the figures given by me, we see thus that there are distinct differences between the spikelets of the two types and it is therefore evident that we have here two different species. These differences between the two species as to the morphological characters are supported by the very different geographical distribution, the plant described by BUSE being hitherto only known from the prairies of the plateau of Padang lawas in Sumatra. Since BUSE described his species and the characters of the spikelets are given here in extenso, it is not necessary to describe BUSE’S plant once more. It is named here after the collector Dr HORNER as a species, endemic on Sumatra, the Paspalum Horneri HENR. = Paspalum hirsutum BUSE, non RETZIUS. A puzzling plant was described by BUSE in the year 1856 in DE VRIESE’S Plantae Indiae Batavae Orientalis as Streptachne indica. BUSE was an accurate observer and described this plant exactly but he unfortunately overlooked an important character. Having studied his type, a plant collected on Java by REINWARDT, I found that the spikelets have an articulation below the glume and thus easily fall of in toto. In the large tribe of the Agrostideae to which BUSE’S plant belongs, this Streptachne is thus not a member of the subtribe Stipeae as BUSE supposed, this subtribe having always an articulation above the glumes which are persistent at maturity. It was thus at once evident that BUSE’S plant was not a Steptachme at all, but more allied with such genera as Polypogon and Chaeturus. It belongs to the genus Garnotia which is already known from Java. BUSE’S species is placed by me under Garnotia stricta BROGN. 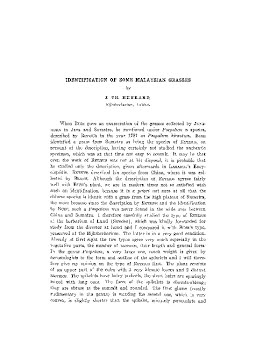