This beautiful flora covers one of the world’s most arid regions, 650,000 sq. km of sand, gravel, and limestone, a desert sparsely adorned by 565 species out of 322 genera of plants. Of these, 392 species and 236 genera are native; among the most extreme desertplants there are a few endemics. The most important families in number of native species are the Compositae (50, in 33 genera), the Grasses (47, resp. 31), the Chenopodiaceae (35, resp. 17), the Leguminosae (34, resp. 16), and the Cruciferae (30, resp. 22). A comparison with Bhandari’s ‘Flora of the Indian desert’, reviewed in this same issue, is interesting: though the area covered there is much smaller (some 25,000 sq. km), the numbers of genera and species as well as the most important families are nearly the same, the latter with two notable exceptions, viz. the Chenopodiaceae with 4 genera and 8 species and the Cruciferae with 6 genera and 7 species only. A few short introductory chapters give a concise but clear introduction to the topography, climate, plant geography, and vegetation. The flora proper gives keys to the families, genera, and species which seem to work well. The families and genera are provided with short descriptions. Literature was not cited, also not with the species. Under the species still commonly used synonyms, if any, are mentioned; description, habitat, distribution incl. citation of collections, vernacular names, and uses are given. Often, notes mainly on systematic questions, and sometimes rather extensive ones, are added. The book is illustrated by beautiful colour photographs, 7 of landscapes and some 250 of plants. These and the clear descriptions make drawings nearly unnecessary; these are only given for the inflorescence types of the Grasses; a few more schematic drawings, especially of the spikelet of the Grasses, could be helpful. The book is finished up by a rather extensive glossary of botanical terms, a gazetteer to the localities mentioned, a bibliography, lists of vernacular names, and an index rightly called general, as everything not yet covered in one of the other indexes seems to have been included. 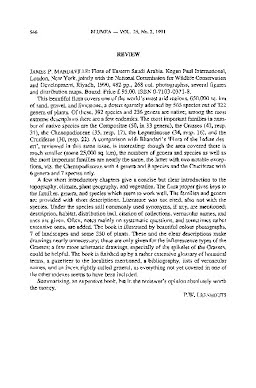