On a collection of Mammals from East-Sumatra

Dr. B. Hagen, the well known passionate naturalist, lived several years in Tandjong-Morawa, later in Medan, East-Sumatra, Deli. He published in »Das Ausland, 1881” a paper, entitled »Vorläufige Mitteilungen über die Fauna Ost Sumatras.” In this paper he solely treated the Mammals, especially based upon the collections made by himself and by his hunters. Afterwards he presented his whole immense collection to the Leyden Museum, several thousands specimens of Mammals, Birds, Reptiles and Insects. Up to the investigations made by Dr. Hagen about nothing was known concerning the Mammals of the eastern part of Sumatra, and so I think that a review of his collections will be very wellcome to naturalists, the more as the Fauna of Sumatra is one of the bases upon which Wallace built his wide-stretching speculations. Wallace (the Malay Archipelago, 1869) made inquiries about the Orang-Utan (not Orang-Outang as Blanford writes, see the Fauna of British India, a. s. o., Mammalia, Part I, 1888, p. 4), but none of the natives had ever heard of such an animal, nor could he find any of the Dutch officials who knew anything about it. He concluded therefore, that it does not inhabit the great forest plains in the of Sumatra, but is probably confined to a limited region in the north-west. Von Rosenberg (Der Malayische Archipel, 1878) related: »der Orang-Utan wird nur in den flachen, sumpfigen Küstenwäldern angetroffen, welche nördlich von Tapanoli das Land bis Singkel überziehen und ihrer Unzugänglichkeit wegen nur selten von einem menschlichen Fusse betreten werden.” Some years ago there was living in the Rotterdam-Zoological Gardens an Orang-Utan from the interior of Padang, West-Sumatra. In 1875 my brother-in-law hunted in Langkat, Deli, East-Sumatra, a very stout Orang-Utan, but unhappily the chinese-workmen had cut it to pieces before he could prevent it. 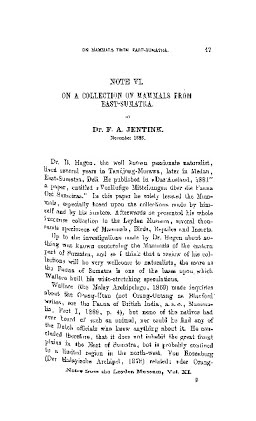