Mr. C. de Groot has lately presented to the Museum a collection of beautifully preserved shells etc., which he has brought together among the stream-tin-deposits of Blitong, in the district of Tandjoeng Pandang, mine N°. 8, Djitjong. Mr. de Groot tells me that these deposits are occasionally regarded as tertiary, and he requested me to give a more exact determination of their age, with the aid of the material collected by himself. I was soon convinced, that the fauna in question belongs to a very recent past, and for this reason it may be more interesting for zoologists than for palaeontologists. In the first place there can be no doubt, that species occuring in posttertiary strata must belong, when representatives of the same species are still living, to the same zoogeographical area of the present time, in which that species is now found. Consequently they may serve to verify the localities from which shells etc. are said to have come, both according to the zoological literature and to the specimens in the musea. A change may however have taken place in the distribution of the animals in these areas with regard to the several islands during the posttertiary epoch as well. Still when similar faunas, as the one here described from Blitong, will gradually become known from a number of other islands, they can yield interesting results with respect to the distribution of animals at a former period. For this reason I resolved to publish the following list in this journal. I succeeded in identifying sixty specimens of the sixtyeight contained in the collection of Mr. de Groot with still living forms. A single specimen, Cerithium montis Selae Mart., has hitherto only been observed in strata from Mount Sela of Java (accompanied by Cypraea arabica Lin., also occuring in Blitong), in strata, to which I have assigned the name of „recente Meeresbildungen” (Comp. Die Tertiärschichten auf Java. Allg. Theil pag. 34). As to the remaining seven specimens, which belong to the genera Balanus, Vermetus, Pinna, Chama, Lucina, Tellina, Trachyphyllia, the five first represent forms, of which the exact determination can hardly he successful, when only undertaken by the aid of the literature on the subject, and as I have not been able to compare them with recent representatives of allied forms, it is very possible, that they do belong to recent species. As to Tellina and Trachyphyllia I hold them to belong to new species ¹). At all events those seven organisms left undetermined are of no consequence in defining the age of the stream-tin-deposits from Blitong as „posttertiary”, because moreover not one of all the species in question has been observed in the tertiary strata of the Indian archipelago. 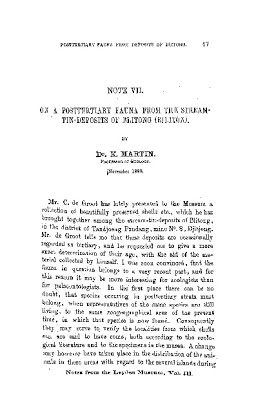