Mr. P. Buitendijk, Surgeon of the Steam Navigation Company » Nederland”, presented to our collection two Petrels, collected by him during his latest voyage to the Netherlands’ East-India. When lying in the roadstead of Semaraug, nortbcoast of Java, at the 25th December 1910, a specimen of Oceanodroma monorhis (Swinhoe) was caught aboard at night. It is an old male, measuring: wiug 156, tail 84, culmen 14, tarso-met. 26 mm.; it agrees with the description of the type-specimen of Thalassidroma monorhis by Swinhoe in the Ibis of 1867, p. 386 (the toes however are wholly black), and with Keuleman’s fine plate in the Monograph of the Petrels by Du Cane Godman (Part I, 1907, p. 32, pl. 14), which represents this type-specimen. Mr. Buitendijk preserved the bird in formaline and when it was skinned by our taxidermist the nasal opening has not been injured; the nasal septum is very short and does not extend so far forward as the sides of the nasal tube, so that, really, there is a single nasal opening. Our specimen is the first example of the genus Oceanodroma, observed in our East-Indian possessions. From Luzon of the Philippine Islands Oceanodroma has been recorded by McGregor (Man. Philipp. Birds, I, 1909, p. 84), but the specimen could not be determined specifically. The second Petrel is an example of the very rare Aestrelata aterrima (Bonaparte), caught aboard ship at night in the Gulf of Aden at the 11th of January 1911. It seems that only three examples of this species were known in European Musea, one in Leyden and one in Paris, both from the Island of Reunion (the two type-specimens of Pterodroma aterrima Bonaparte, Consp. Av. II, 1855, p. 191), and another one in the University Museum of Cambridge, originally preserved in the St. Denys Museum in Mauritius. Our second example thus is the fourth one known in European collections. It is darker and more blackish than the type-specimen of Bonaparte, and there are some yellowish white feathers on the lores and on the head, which likely are the remains of the juvenile plumage. The feet are not yellow and black as stated by Schlegel, but greyish flesh-colour with black outer toe and black terminal portions of the other toes. The rusty colour of the feet in the figure of the plate in Du Cane Godman’s Monograph of the Petrels (Part III, 1908, p. 179, pl. 47) is not correct. The measurements are: wing 243, tail 122, culmen 30, tarso-met. 35 mm. The bird was skinned by Mr. Buiteudijk, who unfortunately did not determine the sex. 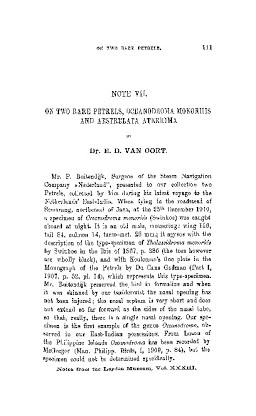