In a recent paper on earthworms of Japan by Seitaro Goto and Shinkichi Hatai 1) there is a short note about Perichaeta Sieboldi, a species described by myself several years ago and based on a specimen collected by von Siebold in the same country 2). Rosa afterwards examined a couple of individuals belonging to the Museum of Vienna and published a detailed description of this species, in which my own observations were confirmed and amplified 3). Beddard identified with P. Sieboldi a small specimen 4), collected by Masatoka Rokugo, but added not much to our knowledge of the worm, while Michaelsen gave an annotation 5) about a not quite mature specimen of the Berlin Museum, which differed by having spermathecae with a short and straight diverticulum. The principal characters of P. Sieboldi are the presence of three pairs of spermathecae, opening into the intersegmental groove of segments VI/VII, VII/VIII, VIII/IX and the number of bristles in this region, being about 80 (76 Rosa). However, among the numerous earthworms, examined by our Japanese colleagues, they did not meet with a single specimen, exactly presenting the above named characters. On the contrary they observed several individuals in which the spermathecae lie one segment more anteriorly, therefore opening in the groove between segments V/VI, VI/VII, VII/VIII, and in which the number of setae in the spermathecal region only amounts to 60. Because these worms not only have a very wide distribution in Japan, but are also found in the same locality where the specimens of the European authors have been collected, they regard them as belonging to P. Sieboldi, though they hesitate to suppose that all the specimens in Europe should present the same variation, or that there should have been made a mistake in stating the situation of the spermathecae. It is much to regret, that Goto and Hatai say nothing about the other characters of their worms, and only mention the number of setae lying between the male pores, being 14—19; for P. Sieboldi shows the remarkable feature, that instead of the single intestinal coecum of most other Perichaeta-species, there are six or seven of these diverticula, separated in two groups, of which the superior one is the longest. Moreover, both Rosa and I myself found the spermathecae provided with a zigzag diverticulum and the large prostata divided in three lobes, two larger crescentic ones and a smaller, pear-shaped one in the middle. After a re-examination of the type-specimen, by which were confirmed all my observations, made fifteen years ago, and considering that the observed differences can hardly be ascribed to variation, I cannot believe, that the worms examined by the Japanese authors belong to our P. Sieboldi, but I venture to suggest that they must be identified with a nearly allied species P. Ijimae 1), also from Japan and circumstantially described by Rosa. In this species, that appears to be half as long as P. Sieboldi, the spermathecae lie one segment more anteriorly and the number of setae in the spermathecal region amounts to 60 1). 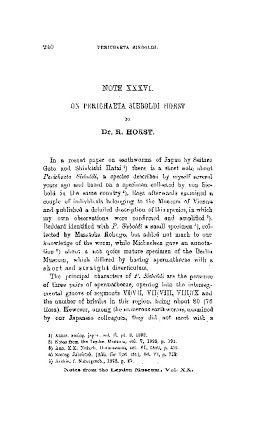