Shell conic, solid, falsely umbilicate, embryonic whorls wanting, of the 8 remaining whorls the four upper ones are nearly strictly conic, the fifth is slightly, the sixth to eighth strongly constricted at the upper, convex towards the lower part, the last carinated at the periphery, with a flat base, which is however slightly convex towards the aperture; the colour of the shell is white, often with a rosy tinge, with irregular rather broad flames of dark rose on the upper part, where the flames are now broader now narrower than the interstices; on the base the flames are less dark and generally narrower, especially towards the umbilicus; the sculpture of the upper whorls consists of five beaded lirae of which the upper and lower ones are the strongest, with the beads less round; a very small intermediate one runs below the uppermost of the lirae. On the latter whorls these beaded lirae become indistinct and disappear by the confluence of the lirae; these whorls are covered by radiating unequal threads, running in a diagonal direction, opposite to the lines of growth; the lower swollen part of the whorls has compressed folds or tubercles, about 19 on the last whorl; moreover impressed lines, in the direction of the lines of growth, but rather remote and much more conspicuous, are visible with a lens on the last 5 whorls. Base with 12 lirae, much narrower than their interstices and with a tendency to be beaded, especially the distal ones, the interstices conspicuously radiately striated. Aperture subtrigonal, outer lip thin, curved, interior with about 11 lirae at some distance from the margin; basal margin slightly curved, bidentate, parietal wall slightly callous, with 2 strong and a few indistinct lirae; columella thick, oblique, with a fivedentate margin and an angle at the union with the basal lip; umbilical tract heavy, narrow., funnel-shaped, deep, lirate, white with a pearly lustre, like the interior of the aperture. Alt. 29, diam. maj. 25 mm.; apert. alt. 6, lat. 11 mm. 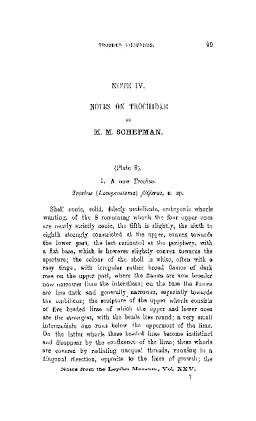