Among the birds collected by the French naturalist Mr. P. Diard, who in the service of the government of Dutch India in 1826 first explored the district of Pontianak, west-coast of Borneo, the most interesting is no doubt a Ground-Cuckoo, peculiar by its large size and vivid colours. Diard got only one specimen, which reached Leyden not before 1828 and which was described and figured by Temminck in his »Planches coloriées” (91e Livr., 1832, Pl. 538) under the name Calobates radiceus” afterwards changed in Calobates radiatus” (Tabl. méth. or Index to the above work, p. 53, 1838). I mention these dates only to show that publication in those days did not go on so quickly as at present. This type-specimen of the Pl. col. is »La femelle adulte”, and Temminck anxiously waited, but in vain, for the »male”, said to be, according to Diard, more vivid in colours and with a tail »double plus longue” (!) No other explorer of that period mentioned this singular bird with the exception of Dr. Salomon Müller, who, however, gives only the name Calobates radiatus, in »Verhandl. over de Natuurl. Gesch., Land- en Volkenk., etc. (1839—44) p. 234, Note) with »Borneo and Sumatra.” Strange enough he does not mention having got the bird himself during his explorations in Western Sumatra (1833— 36), although there is one specimen in the Leyden Museum labelled »Sumatra, voyage Salomon Müller.” Professor Schlegel in his Catalogue of the Cuculi (Mus. Pays-Bas, 1864, p. 60), apparently misled by the duller colours, enumerates this specimen as the »fem. adulte” of the bright coloured Bornean-specimen, which latter he labels »mâle adulte.” The specific identity of the large Ground-Cuckoos of Borneo and Sumatra was thus confirmed, although the measurements given by Schlegel show such unusual differences in size that one might feel inclined to base upon specific value. But Schlegel does not say that there are also conspicuous differences in coloration, and it was not before many years afterwards that Count Salvadori, who got three specimens collected by Odoardo Beccari on Mount Singalang, west-coast of Sumatra, pointed out the specific differences and, although hesitatingly, proposed a new name (C. viridis) for the Sumatran bird. And this is indeed an excellent species, as will be seen by the following characters taken from specimens in the Leyden Museum, which possesses an interesting material on these birds, still very rare in collections. In the British Museum, for example, C. viridis is wanting. 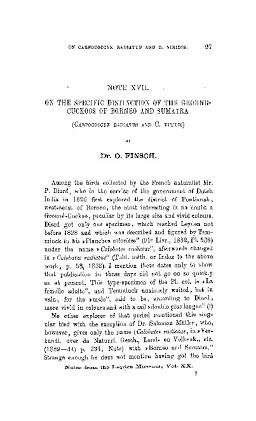