On a large Penella-species from the Moluccas

Mr. J. W. van Nouhuys, Commander of the Government-Marine in Dutch India, presented to the Leyden Museum some pieces of the skin of a big fish (Selachian?), caught in the Moluccas, that are beset with several specimens of a large Penella; in like manner upon different points of the body of these parasites, individuals of the well-known Cirripede Conchoderma virgatum Spengl. have fixed themselves. It is not an easy task to state to what species of Penella our specimens may belong, for though Steenstrup and Lütken ¹) have given us a detailed description and exact figures of four species of this genus, viz. P. sagitta, varians, exocoeti and crassicornis, and afterwards Koren and Danielssen published a rather elaborate paper on a Penella from Balaenoptera rostrata ²), there reigns as yet a good deal of uncertainty about the specific characters of several other described specimens; moreover, as remarked by the first-named authors in their description of P. varians ³) »we know not at all how much the parasites of this genus are liable to an important variation in form, when the chance guides them upon one fish or the other and when they fix themselves into the soft flesh or under such unfavourable conditions, as apparently presented by the fins.” In the catalogue of Parasitic Copepoda found on fishes, published in 1899 by Mr. Bassett-Smith ¹) only six species are recorded, but the number of specific names mentioned in the Zoological litterature, undoubtedly is twice as great, their diagnoses however being often so indefinite, that it is impossible to recognize the species referred to. I therefore think it the best to describe our specimens as accurately as possible and to compare them with the wellknown species. If a later examination may prove that they represent a new species, I propose to call it P. Nouhuysii in honour of the amateur-naturalist, who enriched our collections with several interesting specimens. The largest female specimen (no males are observed) has a length of about 170 mm., its cephalothorax measuring nearly 80 mm., its genital segment 60 mm., and the abdomen 30 mm. It is the greatest length of a Penella-species hitherto recorded from a fish, for P. histiophori Thomson ²), found upon Histiophorus Herscheli, measures only 90 mm.; those living on warmblooded animals appear to be larger, for the not quite full-grown specimens of P. crassicornis St. L. (a parasite of Hyperoodon rostratus) have a length of 80 to 100 mm. and the specimens of Penella balaenopterae, described by Koren and Danielssen had the enormous length of 300 to 320 mm. According to Messrs. Anthony and Calvet, a Balaenoptera physalus, caught at Cette in October 1904, bore on the flanks of its body several Penella-specimens, 100 to 150 mm. in length, that were deeply fixed within the blubber of the animal ¹). 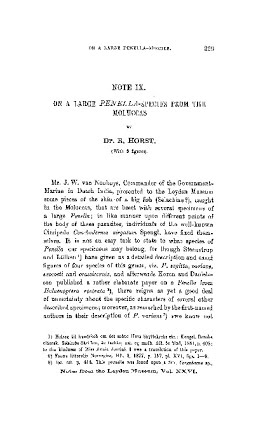