A new genus and species of the Hymenopterous family Larridae

Head transverse, much wider than the thorax, emarginated behind at the vertex, swollen behind the eyes; face distinctly prominent, provided with various depressions, the angles below the eyes angularly produced; eyes strongly divergent (making the face much wider beneath than above), large, narrowing towards the mandibles, the inner orbit straight; only one well developed ocellus; antennae filiform, inserted just above the base of the clypeus, the scape a little enlarged and compressed at its apical twothirds, a little longer than the first and 2nd joints of the flagellum taken together, the 3rd and 4th joints of the flagellum distinctly notched at the extreme base, the 5th very faintly so, the 2nd to 10th gradually decreasing in length, the 11th or apical one as long as the two preceding joints taken together; mandibles curved, very slender and elongate (their tips extending nearly as far as the middle of the eyes), not notched exteriorly, but provided within with a tooth at about two-thirds of their length. Prothorax narrower than the mesothorax, situated in a lower level and sloping towards a transverse groove, the posterior margin sub-angularly bent backwards; mesothorax very convex; metathorax sub-elongate, about as broad as long, sloping towards the truncation; the metanotum bordered laterally by a sharp ridge which ends in a short tooth. Intermediate tibiae with a single spine at the apex. Anterior wings with one marginal cell, truncated and appendiculated at its apex, and three submarginal cells, the first a little longer than the two following united, the second, which receives both recurrent nervures before the middle of the base, narrowed towards the marginal cell, the third lunate. Abdomen short, broadly ovate, very convex especially at the base, considerably smaller than the thorax, petiolate, the petiole however very short. This genus, which in many respects agrees with Larrada, may at once be distinguished by the want of the notch on the outside of the mandibles, by the shape of the metathorax and that of the abdomen, etc. 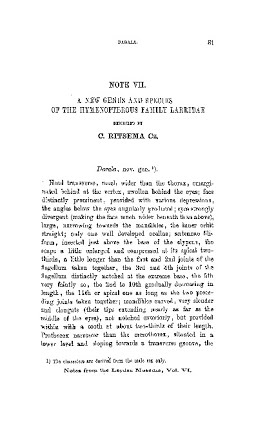