Among a lot of worms, collected in Paramaribo 1), I met with a dozen of small 2?CTiAawn'a-specimens, which cannot be identified with one of the species of this genus, described from America. The number of these species however is not very large. Rosa described a couple of them from Mexico 2) and Paragay 3), and Eisen in a recent paper on Pacific Coast Oligochaeta 4) added four new species from Mexico and California. In this plentifully illustrated memoir he not only published detailed descriptions and figures of his new species, but also of several other allied forms, making thus comparison of the different American species very easy. Though Eisen’s discovery of Benhamia-species at Miraflores »in a locality to which plants of any kind have rarely if ever been introduced directly from foreign country” would indicate that they must be considered as truly endemic, I nevertheless thought it desirable to compare our worms also with the African species, 1°. because there exists a close connection between the fauna’s of West-Africa and West-India, 2°. because, Paramaribo being a sea-port, our species could have been imported by man’s interference, like in many other parts of the world. Thanks the investigations of Michaelsen we know about twenty species of Benhamia from Africa, whose body-length does not exceed 75 mm.; on comparing them with our worms, B. pallida 1) from Togo, appears to be the only species, that shows some resemblance with them, especially in the feature of the penial setae. Unfortunately the description of this species is rather incomplete, being based on a single indifferently preserved individual. Our specimens attain a length of no more than 50 mm.; the breadth of the body in the clitellar region is about 3 mm. The number of segments of a large specimen is 133. The colour of the body is greenish, only the clitellum and setal areae are whitish. The intersegmental groove between the first and second segment is rather indistinct. The cephalic lobe extends with a roundish prolongation till the half of the buccal segment. The segments behind the clitellum show a circular ridge in the middle, upon which the setae are situated; the distance between de ventral pairs of setae is a little larger than that between the ventral and dorsal ones. Clitellum saddleshaped, occupying segments XIII—XX, the anterior and the posterior of them only partly glandular; the prostatepores upon segments XVII and XIX, on an elevated, elliptical area, connected by a groove, that on segment XVIII is faintly curved towards the median line. The oviducal pores separate, hardly visible, at the mesial side of the ventral setae, a little more anteriorly. First dorsal pore in the intersegmental groove III/IV. The spermathecal pores in the groove between segments VII and VIII, VIII and IX, in the series of the ventral setae, connected by a glandular ridge. 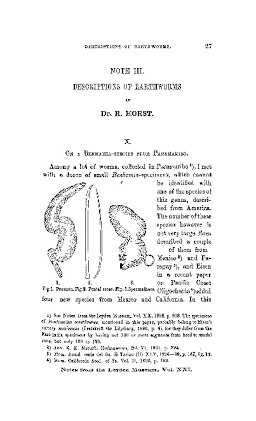