My readers will remember that this species was originally based on a single specimen, introduced into science by Isidore Geoffroy St. Hilaire, under the name of Oriolia Bernieri (Vide: Acad. des sciences, Avril 2, 1838; Revue zoologique, vol. 1, p. 50; Guérin, Magazin de Zoologie , 1839, Oiseaux, pl. 4). When I published in the “Recherches sur la Faune de Madagascar, Mammifères et Oiseaux par H. Schlegel et Fr. Pollen, p. 86, pl. 25” a description and an exact figure of the very same specimen, I considered the bird as belonging to the genus Artamia and the specimen as presenting a yet immature plumage, which led naturally to the supposition, that the perfect plumage of the adult would be a very different one. This supposition was proved true, but only with respect to the adult male, when we received, some years ago, specimens of the adult male and female of the species. These specimens were, shortly afterwards, followed by a small series of others, all killed by Mr. Audebert in the countries bordering on the large bay of Antongil situated on the North-East coast of Madagascar. The specimens of this species, now before me, are thirteen in number, viz. five adult males, two males in passage and six females. It appears from the inspection of these skins, that all the adult females and the males in imperfect plumage show the system of coloration of the specimen of the Paris Museum, figured in my above cited work; that the males in passage, one killed in March, the other one in November, although similar to the female and young male, have their plumage partly varied with black feathers, while the plumage of adult males is entirely tinged with an uniform and deep glossy black, inclining to greenish steelblue. 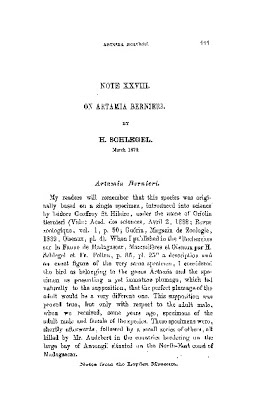