On a small Monacanthus

Among fishes sent to the Leyden Museum by the late Dr. Bleeker, I found a Monacanthus which I cannot bring to one of the described species. It is a small specimen and it may be young, it is however interesting on account of its beautiful markings. When later on more or larger specimens will be found and it is proved that it is not the young state of a form already known, I propose to call it Monacanthus radiatus. The body is oval; the height, measured along the vertical line immediately before the second dorsal and the anal fin, is contained 2 times in the length without caudal and 2 1/2 times in the length with caudal; the breadth is contained 4 times in this height; the head is pointed and contained 4 times in the length with the caudal, in the posterior part higher than long, its upper profile is anteriorly concave, posteriorly convex; the diameter of the eye is contained 2 1/2 times in the length of the head; the snout, to the anterior border of the eye, is contained 1 3/4 times in the length of the head; the lower jaw is rather produced; the four median teeth in the outer series of the upper jaw are pointed, longer than the lateral one on each side, which is more rounded; the teeth in the lower jaw are oblique, with a point on the side directed to the median, rounded on the other side, the median ones are the longest, the lateral ones the shortest; the gill-opening is very slightly oblique, just behind the vertical line of the posterior border of the eye and just before the vertical line of the base of the pectoral fin, inferiorly commencing a little under the horizontal line of the upper border of the base of the pectoral fin, superiorly not reaching the horizontal line of the lower border of the eye; the lateral line is anteriorly invisible, beginning conspicuously above the end of the pectoral fin, then bent downwards and from a little behind the first blue vertical band it is straight; no large spines or bristles are present on the sides of the tail; the dorsal spine is curved and inserted above the posterior part of the eye, armed behind with two rows of larger teeth which are few in number and directed downwards, before there are two rows of small teeth closer together and directed upwards, these have the same direction as the smaller spines on the one-spined scales, which cover the dorsal spine all over; the dorsal spine is strong, but nothing can be said of its exact length the point being broken off; its membran is very small; a second dorsal spine is not to observe; the distance between the dorsal spine and the second dorsal fin is contained 5 3/5 times in the length with the caudal and it is very slightly rising to the second dorsal; below the second dorsal and the anal fin the body is somewhat higher, these two fins are low and anteriorly not higher than posteriorly; the ventral spine is movable, armed on the posterior edges and on the end with larger teeth and extends beyond the cutaneous ventral expansion which is moderately developed; the pectoral fins are short, as long as the diameter of the eye, their base is behind the posterior vertical line of the gill-opening, the upper border of this base is a little above the inferior horizontal line of the gill-opening; the caudal fin is rounded; the entire head, body, tail, even the caudal fin, the dorsal spine and the ventral spine are covered with minute scales, each scale with curved lines radiating towards the centrum which bears one small curved spine, directed backwards; the scales are rounded and placed irregularly; on the ventral flap there are also scales, but these are larger, longer than broad, and with more spines (the figures of the scales are strongly magnified). A small number of isolated, simple, small filaments are on the head, the body, the tail, the ventral flap and the dorsal spine. 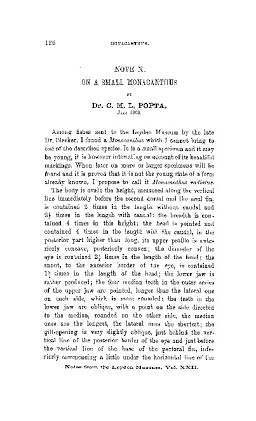