Examining a collection of Annelida from the Zuiderzee I met with several individuals of a think can only be Nereis-species, that I N. succinea Leuck. Yet this worm is a somewhat mysterious species, first described by Leuckart in his „Verzeichniss der zur Fauna Helgoland’s gehörenden wirbellosen Seethiere” 1) and, though this author stated that it was very common at Cuxhaven, it appears afterwards only to have been collected again near Norderney by Dr. Metzger 2). At least in Michaelsen’s „Polychaetenfauna der deutschen Meere” 3) it is not mentioned in the „Tabelle der untersuchten Polychaeten” and the only locality, quoted by him, is Helgoland. The detailed description of N. succinea, published by Ehlers in his Borsteuwürmer 4), was based on Leuckart’s original specimens and those of Dr. Metzger. I was therefore very glad that Prof. Ehlers would give me the opportunity to examine one of the specimens of his Museum and I am very much obliged to him for this kindness. For, my specimens in some regards (length of the tentacular-cirri and shape of the posterior parapodia) deviate from the description given by Ehlers, and moreover I was struck by the great resemblance of the Zuiderzee-worms with the Nereis Perrieri St. Jos. from the Coast of France 1). Nereis succinea as well as N. Perrieri is characterized by the leaf-like development of the dorsal ligule with the parapodia of the posterior segments and the close affinity of both species was already recognized by de Saint-Joseph himself 2); however N. succinea differs from the last-named species by having shorter tentacular cirri, more teeth at the mandibles and a smaller number of segments. The Norderney-specimen of Nereis succinea from the Göttinger Museum, that shows an indifferent state of preservation, is a rather stout worm, measuring 80 mm. in length, 6 mm. in its greatest breadth (with parapodia) and has only 68 segments. The length, stated by Leuckart for this species, is 100 to 150 mm., but unfortunately he does not mention the number of the segments. All the specimens from the Zuiderzee are much smaller, the largest of them measuring hardly 50 mm. in length and 5½ mm. in breadth; however the number of their segments amounts to about 100. Taking this in account and also the well-known fact, that among the individuals of an Annelid there often reigns a great disagreement in the number of segments, I believe that the small number of segments of the Norderney-worm has to be considered as an exception. A character of more importance to distinguish N. succinea from N. Perrieri appears to be the different length of the tentacular cirri, for in the Norderney-specimen these cirri, reversed, do not extend farther backward than to the 4th segment, as already stated by Ehlers. In N. Perrieri however the longest tentacular cirri extend till the 7th setigerous segment, therefore four segments more backward. Now our Zuiderzee-specimens show great differences in that respect, for in some of them the longest tentacular circi reach the 8th, even the 9th segment, whereas in others, from the same locality, they do not extend farther backwards than to the 5th segment or the anterior border of the 6th one. Therefore, in my opinion, there cannot be assigned a great systematical value to this character. Lastly only remains the different number of teeth in the maxillae of both species, for in N. Perrieri there are only 4 to 5 of them, whereas the jaws of N. succinea possess 8 to 9 teeth. Though the maxillae of the Norderney-specimen have the teeth not very distinctly separated, and hardly 6 or 7 of them can be recognized, all our Zuiderzee-worms show a great number (8 to 9) of distinct teeth. The question therefore remains, whether in all specimens of N. Perrieri the teeth of the jaws are so less developed, as described by de Saint-Joseph. On the contrary I observed a remarkable agreement in the arrangement of the paragnathi of the proboscis of both species; for in N. Perrieri, as stated by de Saint-Joseph, both lateral groups upon the dorsal side of the basal region of the proboscis (VI) consist of a circle of 6 to 7 small paragnathi around a large central one. Now this character is also very distinct in the Norderney-specimen and is also visible in most of the Zuiderzee-worms. Upon the dorsal median area (V) there are usually two paragnathi, obliquely placed next to each other. As for the paragnathi of the maxillary region in the Norderney-specimen, group I contains 3 of them, placed behind each other, quite like in N. Perrieri; however in some of our Zuiderzee-specimens this number amounts to 6. 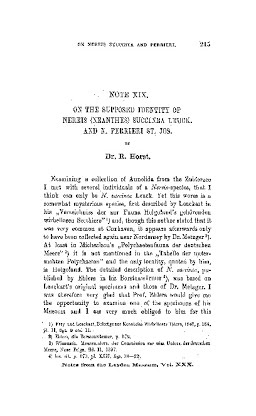